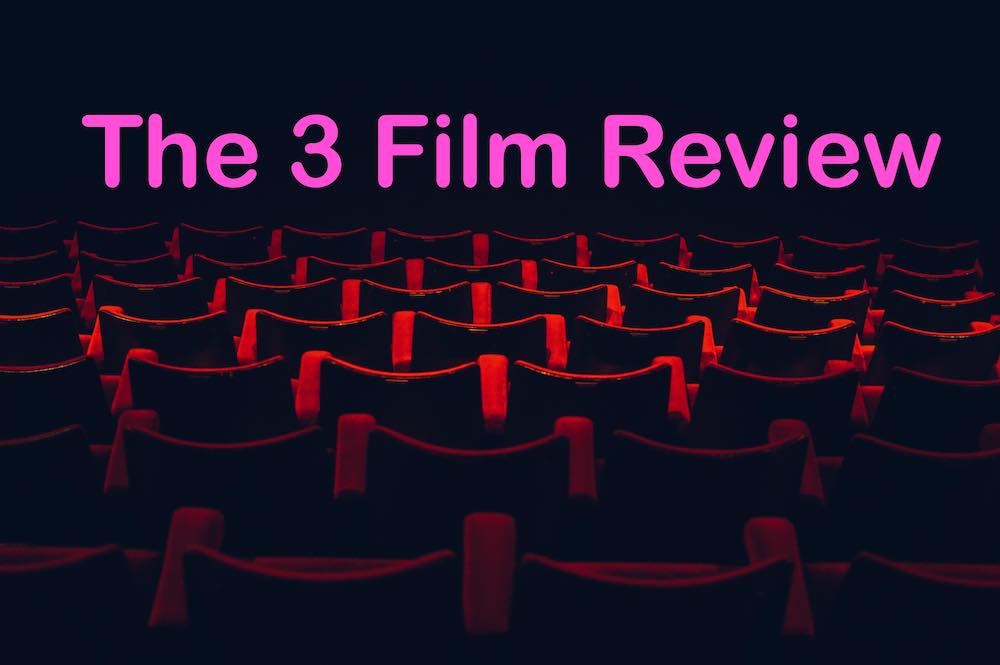 The 3 Film Review for October – The cinemas are open, the blockbusters are back and many of us are craving the silver screen. That’s great news! With that, I am returning to my 3 Film Review. Come on, who doesn’t love going to the cinema?  It’s so exciting to be sitting in a large room waiting to see a film on a huge screen. It doesn’t even need to be the latest film. I often return to watch the classics and films I have loved from the past.

A great film is a timeless thing. Sunset Boulevard? Chinatown? Blue Velvet? Love Actually? Ok, not Love Actually as it was awful, but you get my drift. I love the collective power of communal laughter (or shock) that you only get in a cinema. Many of us have forgotten how great it is to go to the movies. So forget Netflix and streaming. Forget television. ‘Netflix and Chill’ was advertising created by…..wait for it…..Netflix. Now it’s time for Silver Screen and Thrill! Forget staying in and get yourselves to the movies!

Never a 7. Here is the 3 Film review of films currently in cinemas. Nota bene:  I will never give a 7 out of 10. It’s too vanilla.

No Time To Die

Finally! This is the big release of the moment, maybe the year.  The blockbuster we have all been waiting for. Is this the big one to save cinema as we know it after the lockdown closures? Yes, it probably will help to get more bums on seats. What is needed is regular bums to keep the seats warm. But for now, this helps, but is it any good? After an 18 month wait, it wanted to be.

Ah, Commander Bond through the years. How we’d always laugh at his one-liners. He was charming and suave. There were car chases with incredible stunts. Then, there were incredible gadgets. There were really evil and scary baddies and Bond always saved the day. Nowadays that still is the formula. Bond has been modernised over the last  16 years with Daniel Craig. He’s still a lady’s man, but more sensitive than before. Less grabby. And here we are already with his last incarnation of the world’s most famous spy. The 25th Bond film – the oldest film franchise in history.

A lot is going in in this Bond. It is the longest film in the franchise, weighing in at over 2 and a half hours. Most of the time gingerly zips past as the pace and action scenes are good. But, towards, the end I was checking my watch and hoping for a conclusion. There are many twists and turns as you would expect, but I am not giving out any spoilers here. The action is really good and the sets and stunts are incredible. Indeed, as the credits roll, the long list of the crew in the stunt department is notable. What you see on screen is really well made and a joy to see. The director and the crew have excelled. The actors are all faultless, especially Ana De Armas as Paloma. My issue with this film is the plot.

Team Broccoli who control the Bond franchise has a lot of expectations on their shoulders. They have to deliver a Bond film that delivers in a big way and is a box office hit. It is an expensive undertaking and this one had a budget of 250 Million dollars. That’s no chump change. There was a team of thousands to coordinate. It will certainly make money and I am happy about that. A healthy film industry means better content for the cinema goer.

The issue I have is the story. The much-in-demand Phoebe Waller-Bridge was brought in to tighten up the script in pre-production. It must have needed a shot in the arm. I just feel the whole film needed a higher level of foreboding menace. It needed to be scarier. The baddie needed to be eviler. Also, Bond is bullet-proof to machine gunfire. That aside, it is skillfully made and a sure-fire public pleaser. I have to go for an 8 as a 6 would be too harsh. A 7? No, rules are rules.

I bought a ticket to Pig on a whim when I was in the cinema buying tickets for another film. It had Nicolas Cage in and that was all they knew about it. I bought my ticket and hoped for the best. I did not watch a trailer to find out more, I just went along. Wow, we really should all just randomly go and see films sometimes instead of overthinking it. This instantly became one of my top 5 films of all time. I absolutely loved everything about it. It is brilliant and magical in so many ways. Gush. Gush.

It isn’t about the pig.

This isn’t a story about a pig. the pig only exists as the ‘MacGuffin’. It is a device that serves to drive the story forwards. No, this story is all about life, the human condition and what actually matters. It is a philosophical journey into the minds of the characters. To give you a clue, the tagline of the films is: We don’t get a lot of things to really care about. It might be the greatest film where nothing really happens, but what you can see and hear is supremely important.

The film follows Rob, a truffle hunter who lives off-grid in the forests near Portland. He find the precious and delicious truffles with the help of his pig who had a world-class truffle snout. Life is peaceful until his pig is kidnapped. Rob then is forced to return to the city and search for his pig. This film is about Rob and the people he meets in the search for his pig. The film is beautifully made on a relatively modest budget. Films can still be made with a small number of actors and crew when the script is great. That is what happened here. Make no mistake this is one of the most beautiful and important films of the year. I will be seeing this again.

The Many Saints of Newark

To my mind, the Sopranos is the greatest TV series made. It got better and better through the brilliant 6 seasons of the show. Many fans were heartbroken when it ended. It needed to end on a high as it did. The temptation for some writers, producers and TV stations is to keep pushing their winners until the public totally loses interest. That was not the case with the Sopranoes. It was relentlessly high quality and then it ended. Here we are years later and David Chase, the creator of the Sopranos has released the prequel film: The Many Saints of Newark.

Tony is growing up

Essentially, this is the back story of young Tony Soprano during his formative years. What were the elements that made the mob boss Tony Soprano who he was? James Gandolfini was excellent in the role of Tony Soprano and here his son, Michael slides perfectly into the role of the young Tony. How very fitting. This is the generation before the Sopranos.

Fans of the series will love this. It gives so much insight and background to the characters of the TV series. You have them all, but younger. Uncle Junior, Paulie Walnuts, the whole shebang. Most of all, we watch the young Tony. We are given clues about him. The other main protagonist in the film is Tony’s uncle, Dickie Moltisanti (Italian for Many Saints…). His influences over Tony are massive and we watch his troubled personal and business life unfold in explosive fashion. It goes with the territory, so to speak.

All these lives are presented to us during the race riots of Newark in 1967. Tension is in the air and it is stifling. The skies are lit up orange by the fires. The gangster life is slowly drawing Tony in, but he is torn as he is later in life. History is preparing to repeat itself.

In a visual sense, this film is perfect. It is a joy to watch the old cars glide along, the houses and the costumes are all faultless. Let’s see how this film does during awards season. Make space on the mantlepiece. The soundtrack too is pitch-perfect. You would probably enjoy this film more as a Sopranos fan, but it might also work without. Either way, you will soon be checking out the Sopranos on streaming and you could not choose a better series.

I hope you enjoyed the 3 Film Review, Now go and enjoy a film in one of Amsterdam’s many fab cinemas. See our handy Amsterdam Cinemas overview to know our favourite places to see a great film.

We recommend having a Cineville card and/or a Pathe Unlimited Card. We have no commercial links to them, they are just FANTASTIC for cinephiles. The 3 Film Review will appear again soon.