Talencoach – Learning Dutch with the Brainwash. 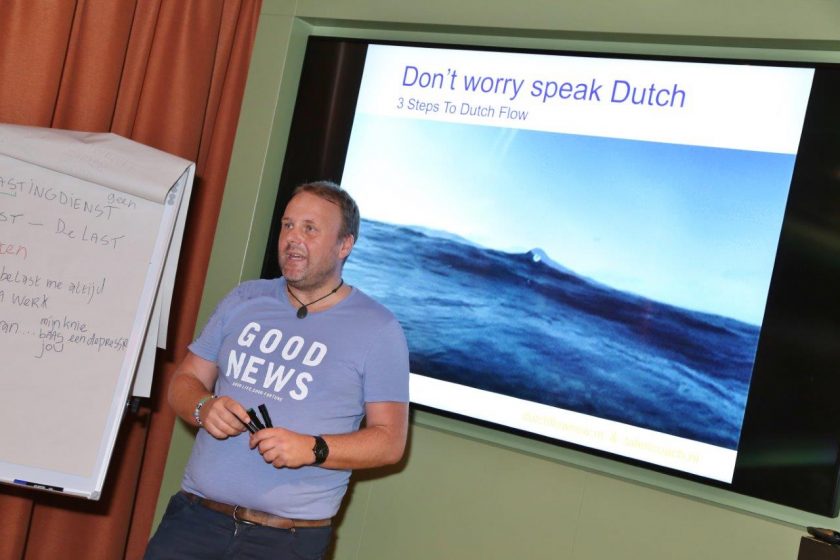 When is the right time to start learning Dutch ?

Most of the time, the answer to that question is : yesterday. It is very easy to get by in English and let the Dutch learning slide until tomorrow, aka next year. I should know, I did just that.  I picked up a small selection of Dutch words for fun and basic niceties, but nothing more. I ask myself ‘why?’. sure I thought about it, but I was always so busy with my expat community work that I never found the time. No one ever said to me, “David, how’s your Dutch?’

Also, I love languages and learning new things. I simply got in the easy going laziness mode of getting by without Dutch. I never took the steps necessary to start moving out of my comfort zone. I used to joking say the Dutch are too good at English for me to learn Dutch. The difficult truth was that there was one major block to me Dutch learning : ME.

I thought I could get by. I had convinced myself it was too difficult. I had no external pressure at work to learn the language.

I have been asking the same question over and over to language professionals : Why should I learn Dutch ?

1. So Albert, please tell us what inspired you to be a Dutch language teacher and when did you start Talencoach ?

I decided to become a Dutch language coach, after a one day coaching session of one day…. Although I always loved languages, somehow it had never come to my mind to teach them. The reason was that I never liked the link with literature and poetry (at universities). Somehow I found normal language courses too boring. But… during that coaching session a new idea came up… Why not develop my very own language method? I decided to do courses about coaching, NLP and I did even hypnotherapy. I quit my job (I was working for a television organisation in Hilversum, omroep). Then started to give my first lessons…. 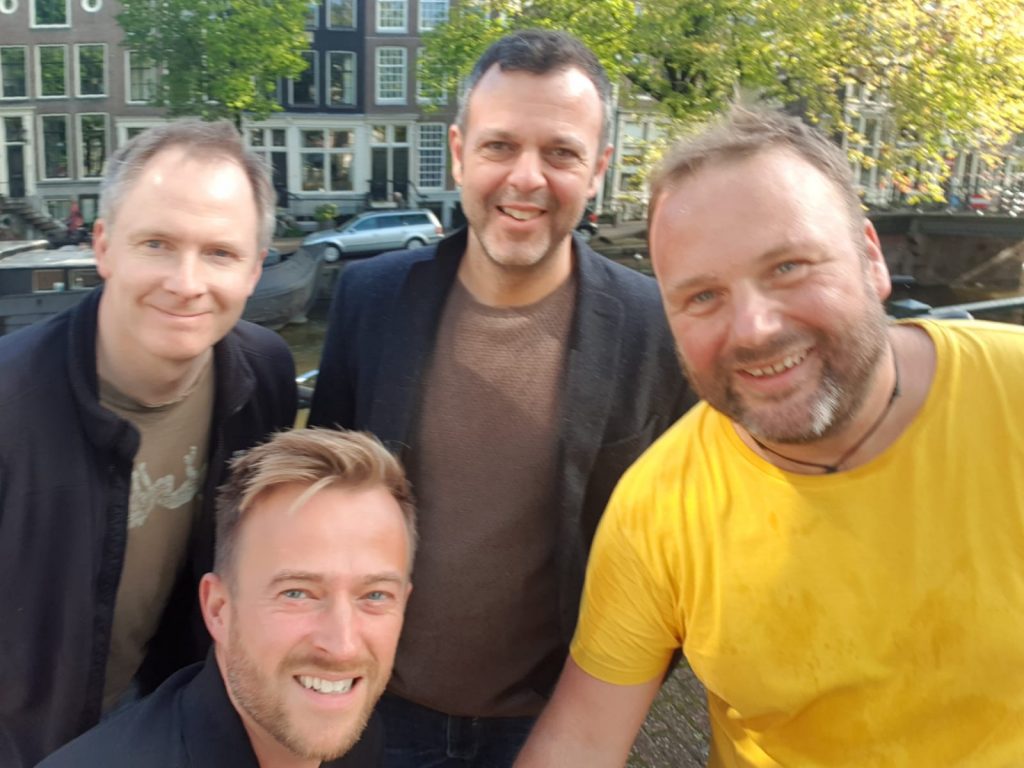 I also read loads of stuff about Accelerated Learning, immediately applied the principles and 15 years ago I started with a bike and a laptop and I went to the homes of people in Amsterdam.

Initially I wanted to teach many different languages – which explains the many different flags in my logo. Somehow people kept asking me again and again to teach them Dutch. Initially I did  not like the idea, because at school Dutch was always my least favorite subject, I was really bad at grammar at school, but later I gave in.

I thought it could make sense, as I am a native speaker of Dutch and I am based in  Amsterdam. While working with all different kinds of people, I discovered what was standing in the way for people to learn Dutch faster and to speak more. 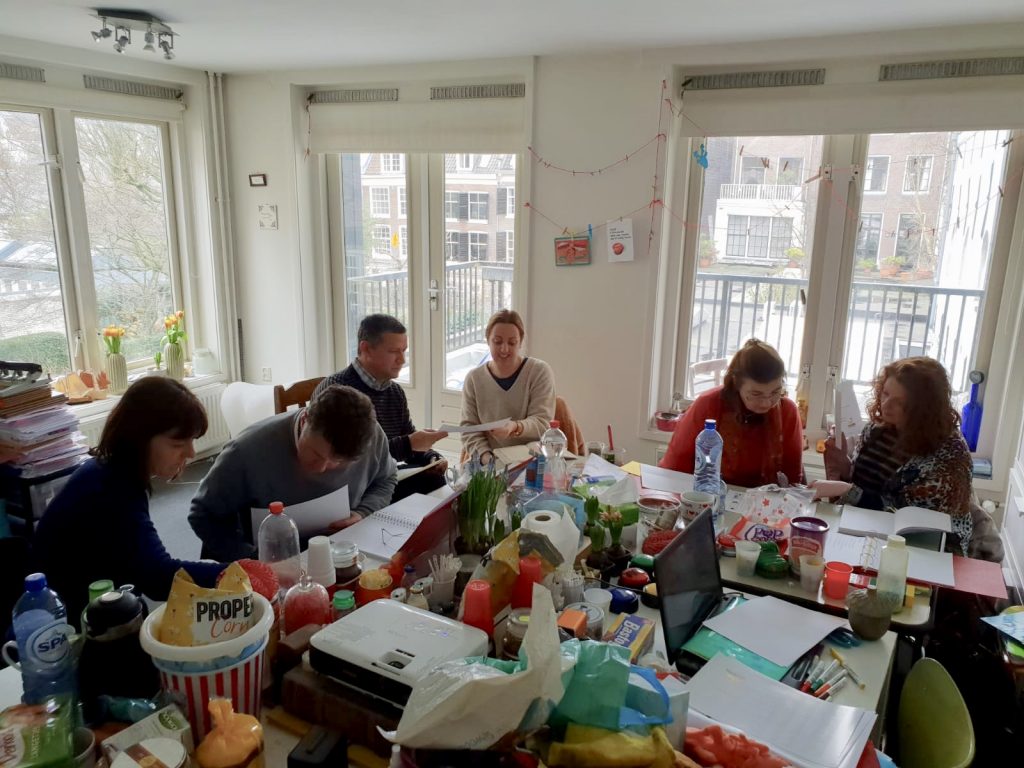 One thing that helped me a lot was that in 2000 my partner José came from Spain to Amsterdam. I did not teach Dutch at that time, but I discovered very quickly that traditional courses were not effective at all. The great thing was that I could really stand in the shoes of a Spanish speaking person.  I found many different ways to speed up the learning process of José…

Another thing that I quickly  discovered was that all language courses are too difficult. People need to memorize, rather than really understand the language. That is why learning and speaking Dutch seems to be impossible, certainly in the beginning. What I did was to make sure that when I spoke Dutch with my partner, it was quite close to English and Spanish in the beginning and gradually I raised the level…. This is why for José many more things made sense, all of a sudden…

So in a sense, I already started to have my first teaching experience in 2000, I quit my job in 2003 and in 2010 I started my First Dutch Brainwash Course in Amsterdam.

2. Who are your students, where do they come from and why do they want to learn Dutch ?

My students come from all different kinds of places and they all speak English. I often work with people that have been hanging around in the Netherlands some time.  Then they start to realise that they like to stay much longer in the Netherlands. Often they bought a house, got children, got a job that they liked or found love! 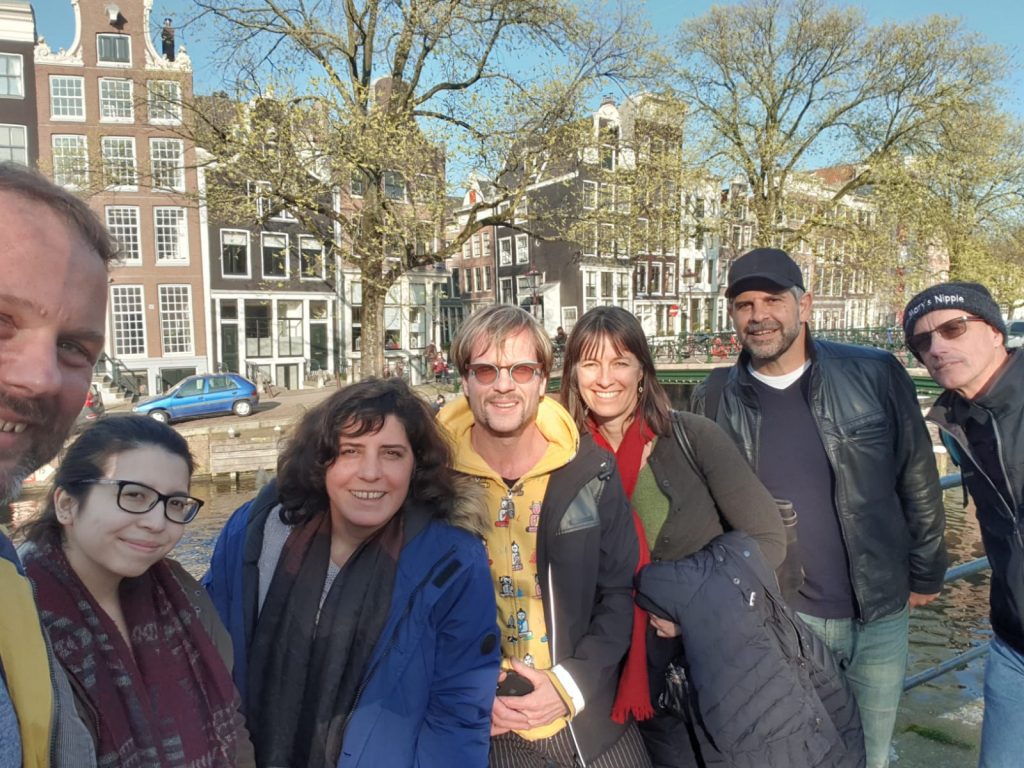 All my students are very committed. They feel a drive to bring their Dutch to a much higher level and they usually have a rich range of different interests. They really like to integrate in Dutch society and in general they love to know more about Dutch culture and Dutch humor.

The funny thing is that I work with people from different ages… Some people are only 24, while others are already in their 70’s…

3. Have you identified common and regular problems students have with the Dutch language. What are they and how do they over come them ?

Of course there are some typical problems and obstacles that you have to overcome. First of all, you must decide that you want to speak Dutch and that English is not longer enough for you.

Another problem is that in most language courses they do not really explain how Dutch works. You just have to memorize things and often they only talk about one subject at the time. This means that sometimes you have to talk for 2 hours only about the weather or the vegetables in your fridge…

One obstacle is that many people do not really like Dutch, or they feel frustrated because they lack a certain confidence. The great thing is that once people start to see that Dutch is a logical, consistent and even a funny language, then everything changes….

By the way, humor is extremely important to overcome obstacles. When people laugh a lot, then inhibitions melt away.. Once people start to understand how Dutch humor works, then all of a sudden they like speaking and learning Dutch a lot more, because they feel more connected…

I always love to say that humor is one of the highest forms of intelligence. Only people (and maybe animals), seem to understand it, but it is still to advanced for computers and machines… for understanding humor you need a lot of intelligence… You need to think in logical and creative ways at the same time and it is above all also about feelings.

One of the biggest problems is that people are often too serious. They take themselves too seriously and they make Dutch far more complicated than it actually is. If you like to speak fluently, all you need to do is that you master some simple principles, and master them really well… Then, if you like you can talk about anything that you like, in Dutch…. 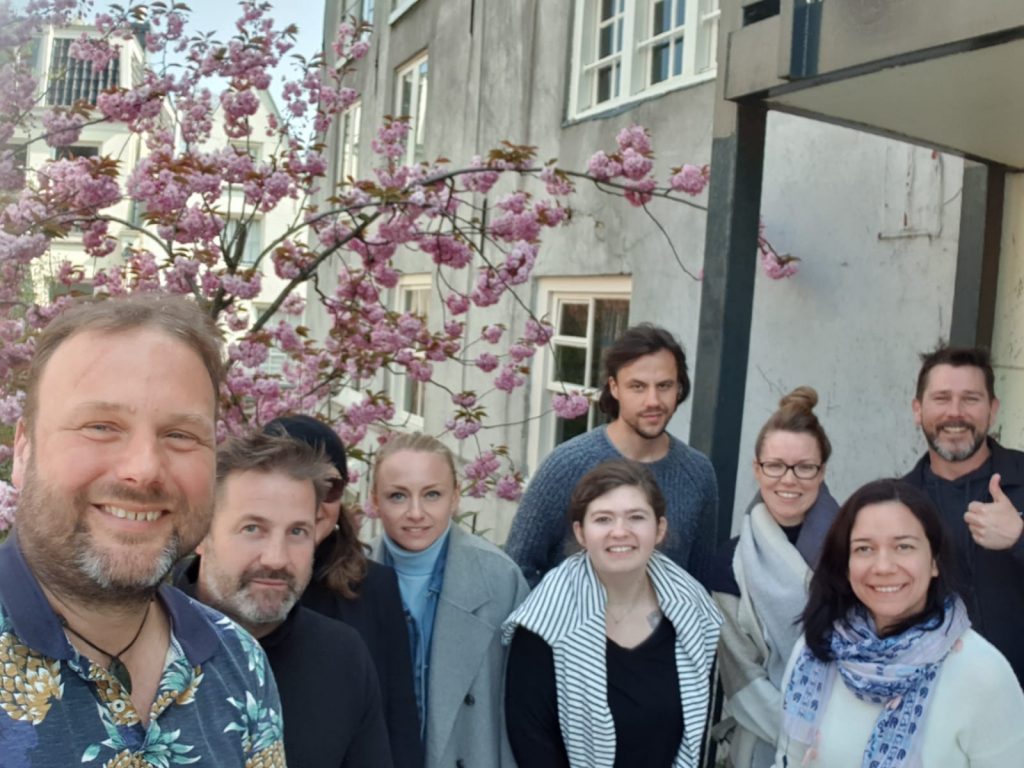 4. You have a particular method, can you explain what it is and why you chose it ?

I use my own method which I call the Dutch Flow Now method combined with Dutch Brainwashing, which means that people learn this method during 7 days of immersion… Although Dutch Brainwashing may be associated with techniques from North Korea, it is actually a very gentle process.. It simply washes away all the negative beliefs that you have about Dutch or yourself when it comes to learning and speaking, and once you start to look with a whole new perspective, everything is different….

The Dutch Flow Method is a great method, because in other courses you sit down like a brainless parrot and you try to repeat things. But… the great thing is that certainly when you speak English – and if you speak other languages as well , such as Spanish, French, Greek, it is even better. It means that you have a lot of knowledge already, because Dutch has a lot in common with other languages.

With many other courses they only speak Dutch to you, but this makes little sense. If you don’t understand it, then you will not be able to understand a grammar explanation in Dutch either. With Dutch Flow Now you’ll keep using other languages that you already know so that everything that you learn makes perfect sense.

With the Dutch Flow Method you learn 2 things at the same time. How to thing logically in a very structured way, because in a sense, Dutch also works as a computer language. Then, you also learn how to think creatively, intuitively and out of the box. It is exploring more than just learning. Once you discover experientially how Dutch works, then all of a sudden much more is possible…. 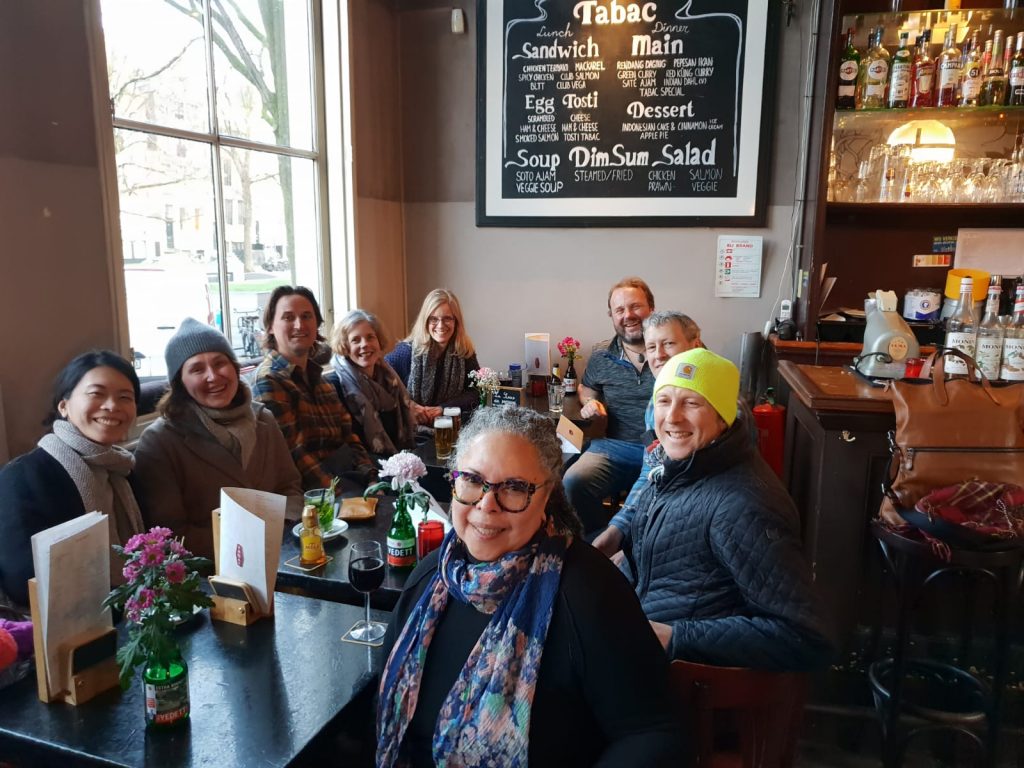 5. What is your number 1. tip for expats to improve their Dutch skills ?

Contrary to what people may believe, Dutch is not that hard. It is relatively easy, because it is the closest language to English and you can see it as a German light… Dutch has the same logical system as German but it is a lot easier!

At the same time a strange thing happens. Many people either underestimate or overestimate the difficulty of it.

It is important that speaking a new language will always be a challenge, but… if you know how to do it, you can have great results really fast! Make sure that you realize that you’ll have to face a challenge and… that it can be fun and enriching… Make sure that you really  know how to have fun with it and that you are kind to yourself… Feel free to experiment, enjoy making mistakes and speaking Dutch could be one of the best learning adventures that you ever had!

Thank you Albert for those wonderful insights. Our belief is that anything can be learnt…even Dutch. The battle to begin to take the plunge is won or lost in the mind from the very start. It will take grit and determination to overcome the obstacle, but it is within the reach of everyone that wants to do it and expert help in the beginning makes all the difference.

If you would like to know more about the Talencoach method, here are the contact details for Alert Both :