Spanish Film Festival Article – One of the best things about Amsterdam is the quite large number of cinemas. There are the Pathé cinemas, including the absolutely beautiful Tuschinski cinema. It recently won an award as one of the most beautiful cinemas in the world. Then you have the wonderful EYE Film Museum that collaborates together for the Cineville system; and the unique OBA Centraal Amsterdam. They are all making films available to the public with massively varied content all year long. Going to the cinema is still a magical event. To be lost in another world created by writers actors, directors and all the other talent that goes into making a film.

Some of the cinemas show world cinema films with English Subtitles and they can be a real eye-opener. Now in November in Amsterdam, we all have the chance to see a huge variety of Spanish films as the Spanish Film Festival comes to town. Of course, it includes films from Spanish speaking Latin America, so the selection is very diverse. Here is a Q+A with the organisers of the SFF so we can discover all about this festival. 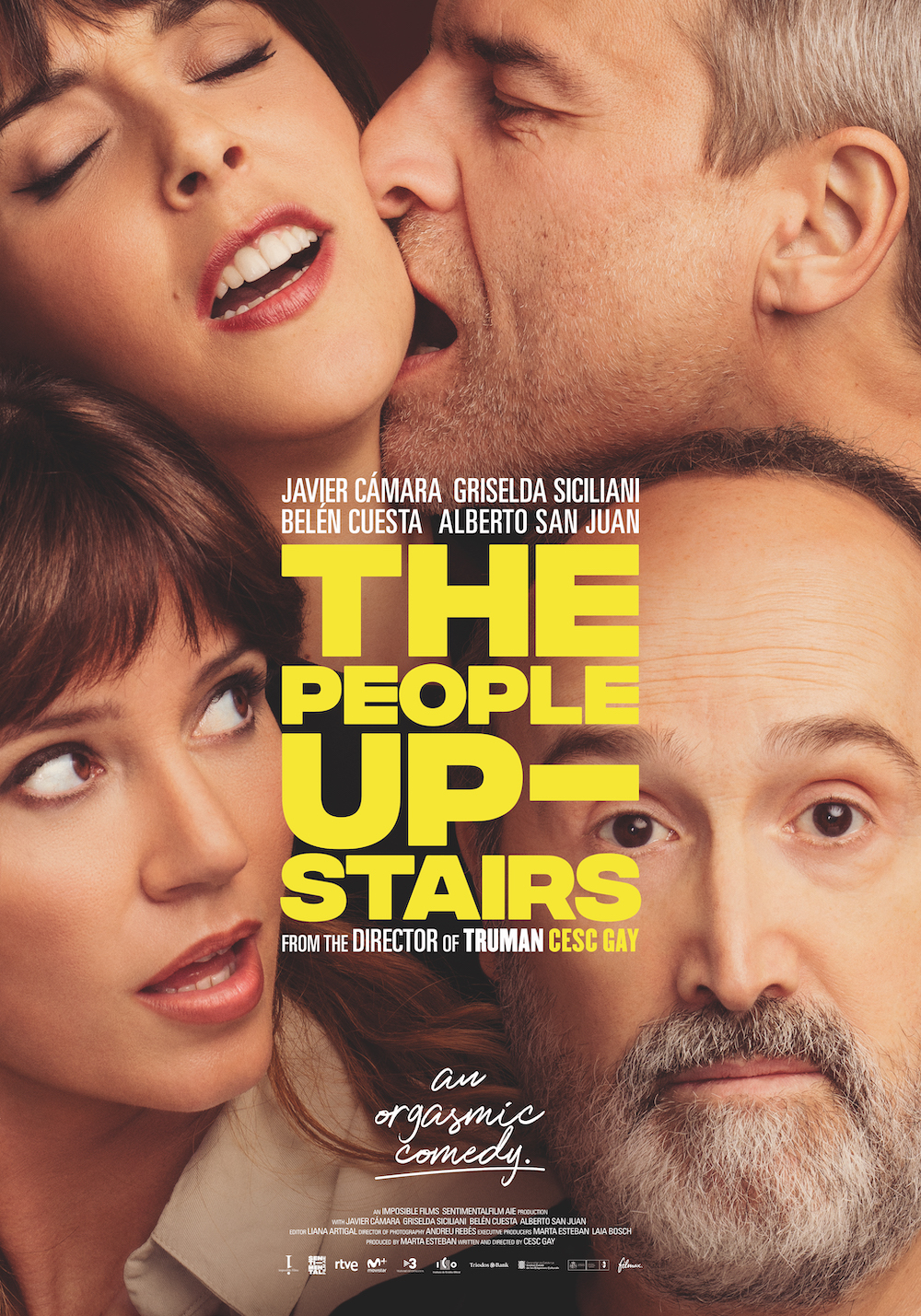 So, from the 5th to the 14th November we all have the chance to see some really great films in Spanish. Almost all with English language subtitles. Many of us are aware of the work of Pedro Almodóvar, but who else do we know? Probably not so much in general, so the SFF is a great chance to see some wonderful films.

q1. Please tell us more about the Spanish Film Festival.

The festival offers a glimpse of what Spain is doing nowadays in the world of celluloid. For 10 days, and in 4 different locations, attendees will experience an exciting and heart-warming journey together and celebrate Spanish cinema through remarkable stories. We will be taking you on a journey of film, music and gastronomy; presenting the most powerful, thought-provoking, original and enjoyable Spanish language films released over the past year. From thrilling dramas to delightful comedy and ground-breaking documentaries, this 7th edition will surely blow your mind! 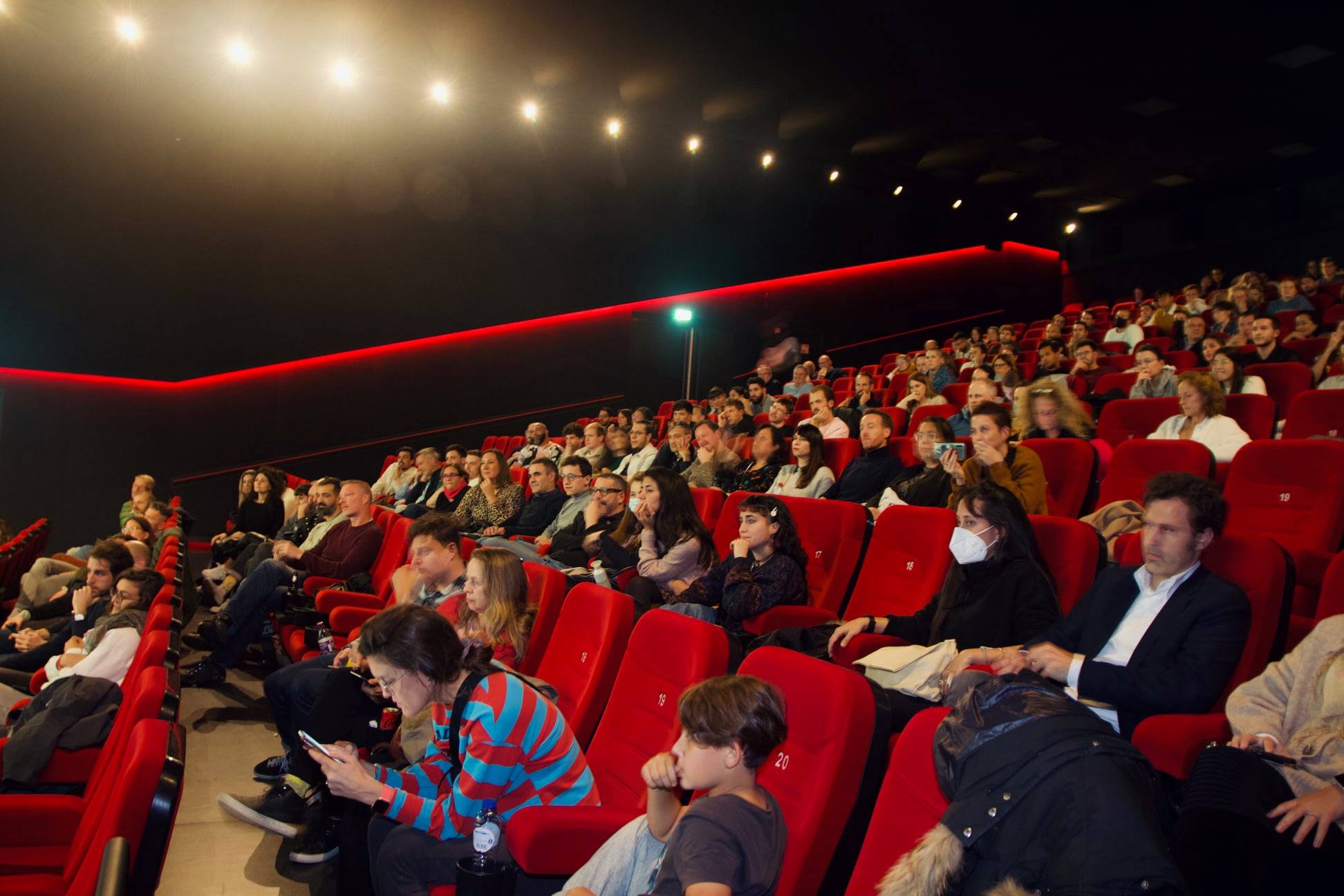 q2. How is the Spanish film industry doing in general? Spanish language films must have a huge market right?

The Spanish film industry is very resilient and has shown over history to be able to fight the difficulties it finds, that’s why we need to support independent filmmakers, producers and festivals more than ever after the devastating last year. Spanish Cinema has a large trajectory and it’s a very iconic and specific language that makes it an important part of our culture, filmmakers such as Luis Buñuel or Pedro Almodóvar have shaped not only Spanish Cinema but Spanish Culture as a whole. That’s why I find Spanish language films do have a huge market, because they offer something different in terms of style, language and the stories they tell are always very human but intense, so everyone can empathise with them. 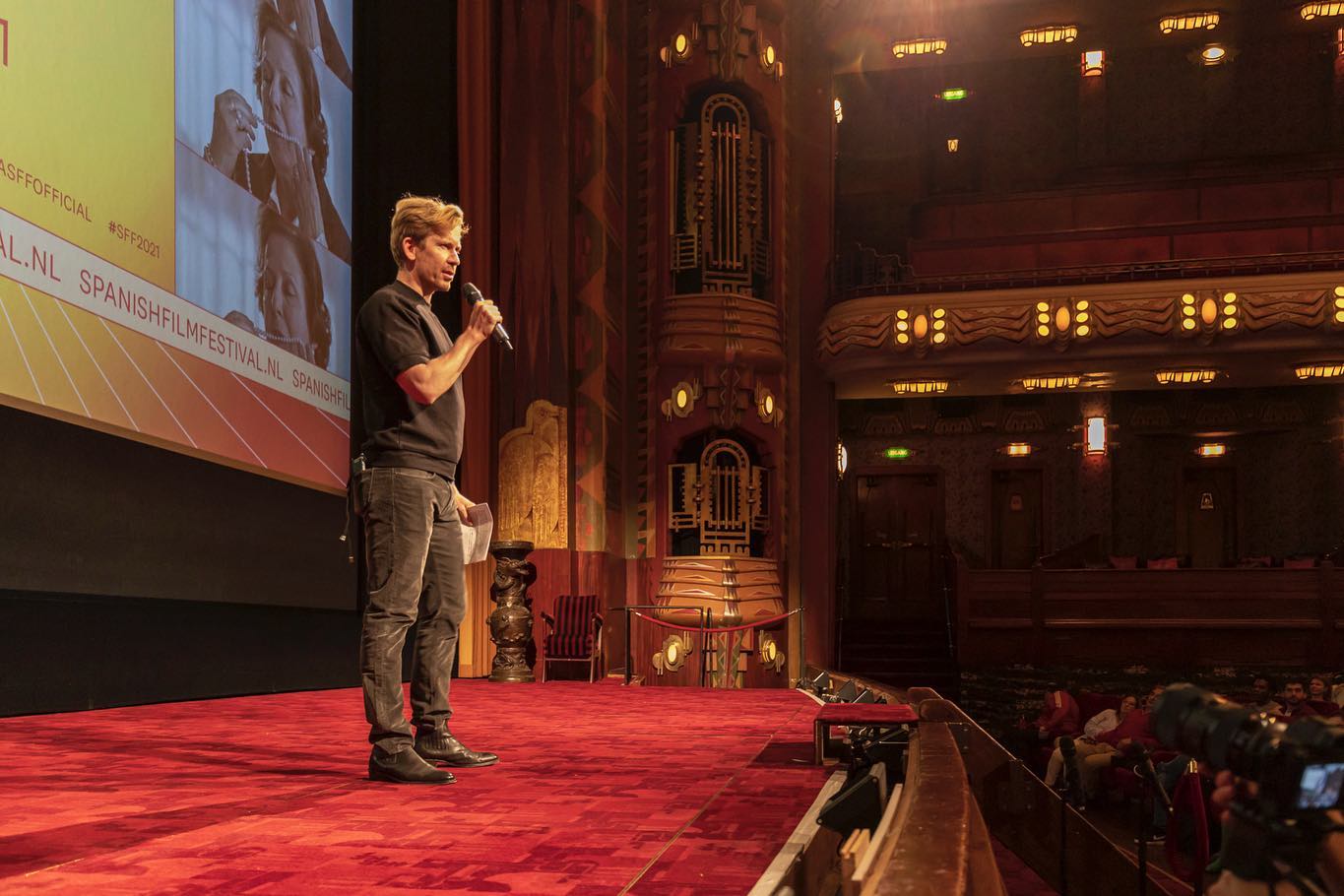 q3. Which films during the festival are particularly noteworthy.

Our centrepiece film is the hilarious ‘Sentimental / The People Upstairs’ that everyone who wants to have a good time should watch; we also have the powerful ‘La trinchera infinita / The Endless Trench’, an extreme story about the Spanish Civil War. Both of those movies are starred by Belén Cuesta (known internationally from ‘La casa de papel / Money Heist’), who will be in Amsterdam introducing the films. We’re happy that the film ‘El buen patrón’ by Fernando León de Aranoa with Javier Bardem is part of the festival.

The film premiered in the San Sebastián Film Festival just two months ago so we are very lucky to be showing it already with its Dutch premiere. Last but not least, the fascinating ‘Destello bravío / Mighty Flash’ is a must-watch, a film in the border between fiction and documentary that uses non-professional actors, a very special, disruptive electronic soundtrack and suggestive camerawork, one of the most interesting films we’ve had so far. 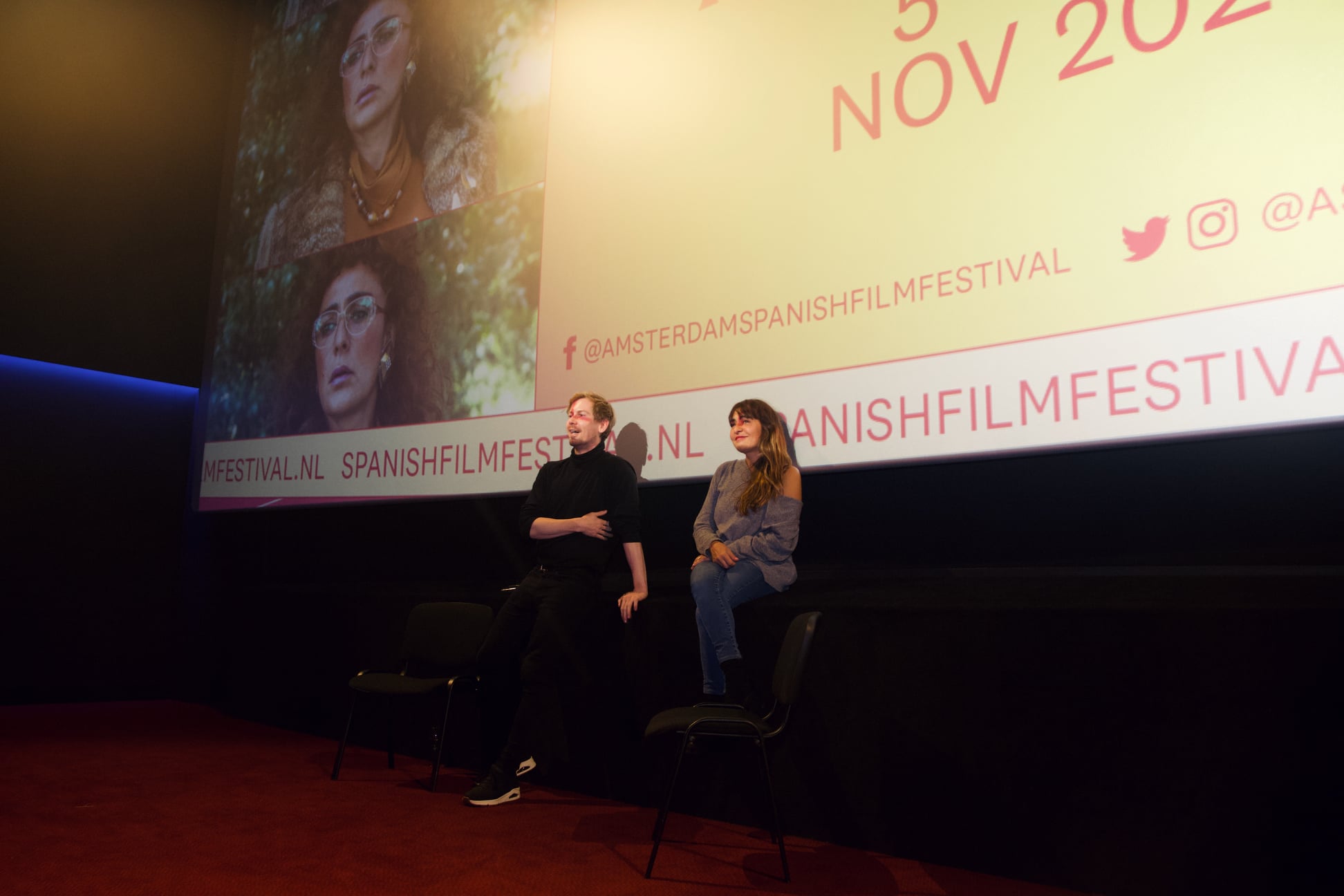 q4. A certain number of actors and directors are attending. Is this a big event in the Spanish film calendar?

Our guests love to come to Amsterdam and present their films in such iconic cinemas as Pathé Tuschinski and Eye. We have a very good relationship with them during their stay in the city so they are delighted to come back. The festival is becoming more and more popular in Spain. 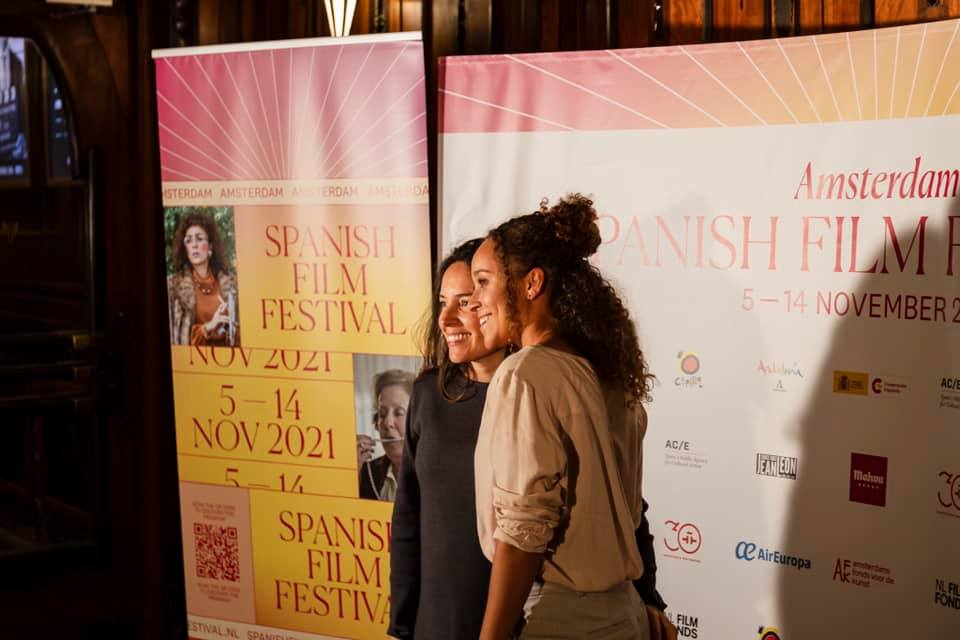 q5. Are there any special events the viewing public should know about?

We offer the whole Spanish cultural experience during the festival.  That’s why our viewing public should not miss the special events we have prepared alongside the screenings. There is a Q&A with some of the most well-known and multi-awarded Spanish actress and creators such as Candela Peña, Belén Cuesta or Bob Pop.  Then there are great plans such as a Mexican experience after the screening of ‘Nuevo orden / New Order’. Furthermore, our already iconic ‘Spanish drinks and ham’ before and after selected screenings. You can check our special events here.

For more like this, see our local Amsterdam Blog articles.