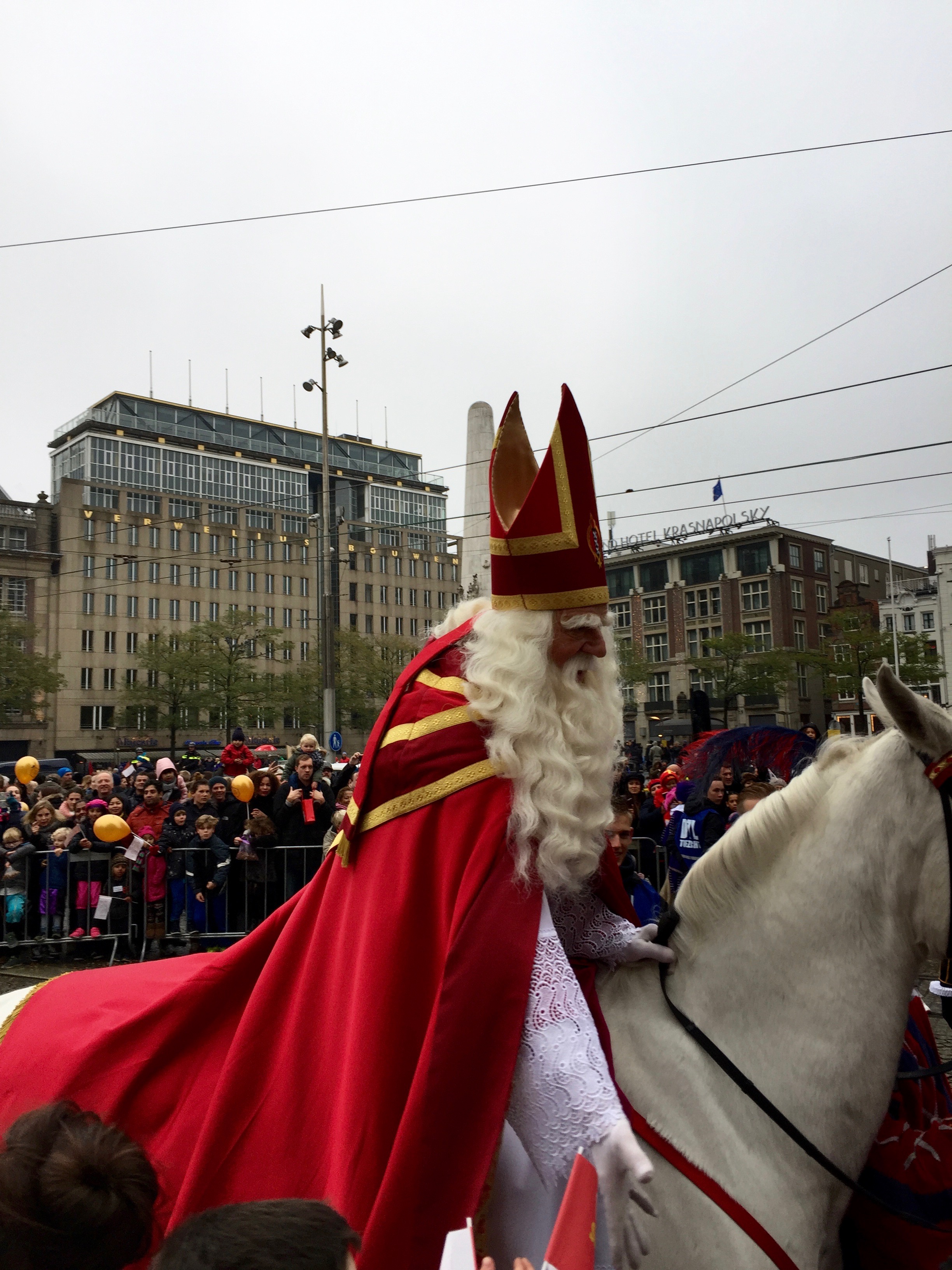 The Dutch are different, right ? A lot of countries happily celebrate Christmas on 25th December, exchange presents and eat and drink too much. That’s their tradition. Classic. No, not the Dutch. they have a almost completely different tradition. Here we will look at what happens in The Netherlands and why. Embrace it though as it means us expats can celebrate twice and December is a great month for the kids ! Another tradition is Sinterklaas and Zwarte Piet…

The history of Sinterklaas and Piet

So Sinterklaas is not Father Christmas, but he is a kind of Santa Claus (Saint Nicholas). He doesn’t live in Lapland, but he does have little helpers (Piet, more on that later). It all seems to date back to medieval tradition and St Nicolas being the patron saint of children. Sinterklaas is almost certainly the genesis of Santa Claus, and yes most likely exported by the Dutch around the world during all the seafaring adventures. 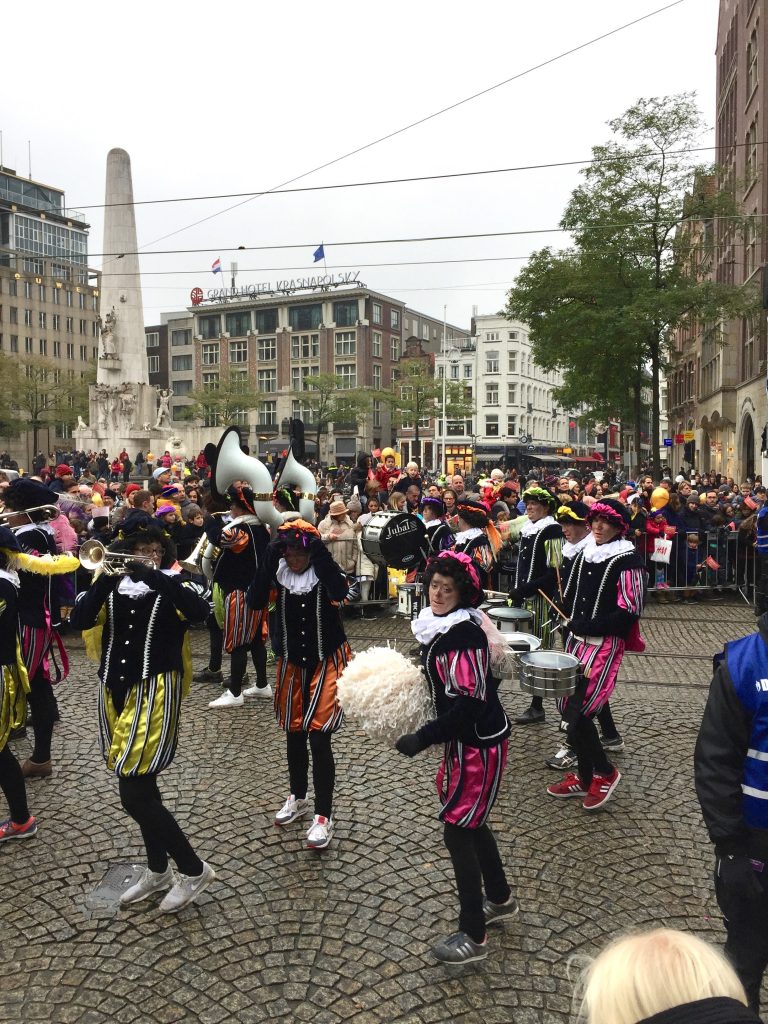 He looks like a classic Christmas character too. The old, portly man. The long white hair. The dress sense is more quasi-religious though – What looks like a gown the Pope might wear with a Bishop’s mitre with a cross on it. Father Christmas has a very unified and cartoonish dress sense around the world.

In Dutch traditions, Sinterklaas and Zwarte Piet live in Spain and travel to visit The Netherlands in November. The origins of that might be influenced by those years of Spanish rule over The Netherlands.

What’s is really going on ?

If you start to see Christmas themed decoration in Hema in October, don’t be too shocked. The preparations will need to start soon and mid November Sint comes to The Netherlands. He then goes on a whirl wind tour of the country and arrives back in Amsterdam with a big parade on 5th December. That same evening the Dutch eat and exchange gifts. That evening is called Pakjesavond (presents evening) On the 6th December is the Feast of Saint Nicolas, a celebration much like Christmas Day.

Sinterklaas and Piet arrive late on the 5th with gifts, so some of the smaller children will have fallen asleep and will wake up in the morning to see if they have been good or bad. The good kids will get presents. In the days before that the children write little poems and wish lists for Sint and Piet.

His arrival is Amsterdam is a major event. You can see him on his boat and then on his beautiful white horse called Amerigo. A huge carnival atmosphere grips the city. A 1 kilometre long parade snakes through the city and nearly 500,000 spectators go wild to see Sint back in Amsterdam. His Piets give out the traditional Pepernoten biscuits (little spiced biscuits) and sweets to the children that line the route. 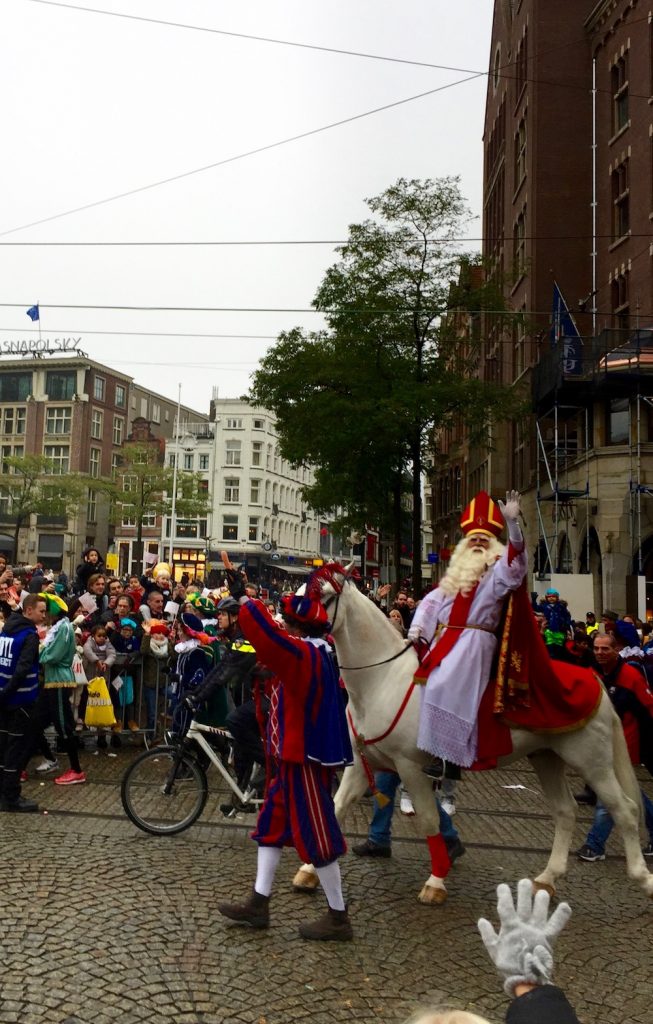 His route through the city covers all the main central areas and finishes at the Leidseplein. He then goes on to the balcony of the iconic Stadsschouwburg and give a message to all the children. That is followed by lots of music and fun. The atmosphere is always electric and it is quite something to see it, so get there early and secure a good view. On the 6th December Sint goes back to Spain.

Piet is Sint’s helper and there are thousands of them. The tradition has it that Piet became dark and dirty with soot going up and down all the chimneys delivering the presents to the children.  Some say it is a harmless Dutch tradition and all the children love it. Other voices say that it needs to change and modernise. In 2008 a campaign started to change the Pieten. It went along the lines that the Pieten were a nod to the Dutch history as slave traders and that it was no longer acceptable. The Pieten have red lips, full black make up, large gold earrings and curly wigs and is clearly a racial stereotype and offensive. 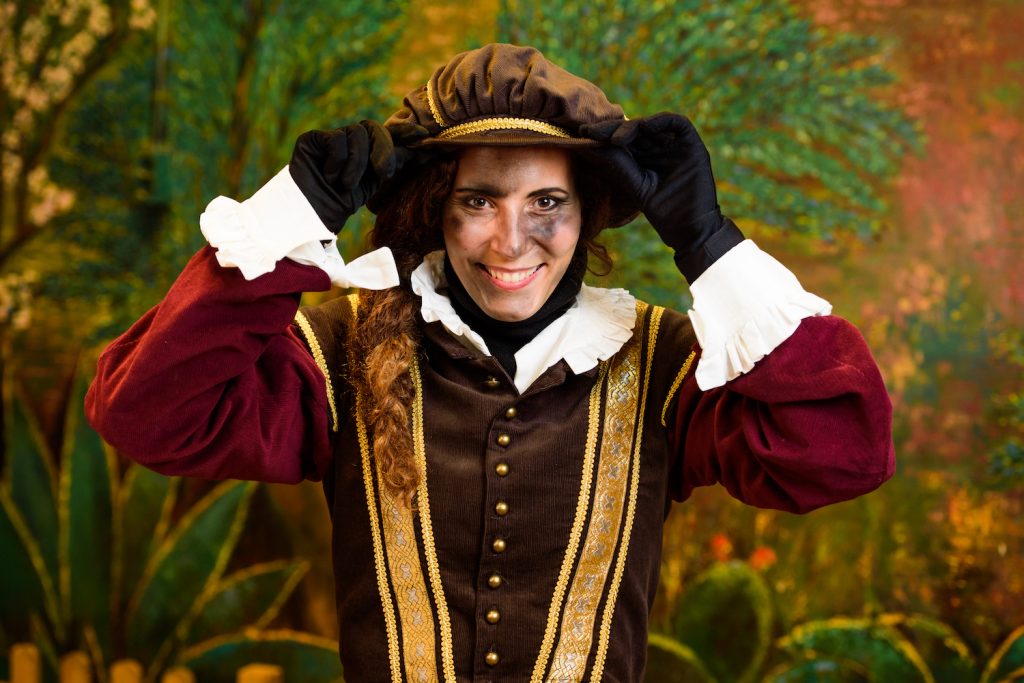 Battlelines were drawn between the people asking for change to the Sinterklaas tradition and the traditionalists saying none was needed. A police presence was often in place to keep the two groups apart. This spectacle was less fun for the kids that saw it. Over 10 years later change is happening. Pieten will now not black up but just have a dusting of soot. This is how it will be in Amsterdam. It remains to be soon if other areas of the country will follow this example. 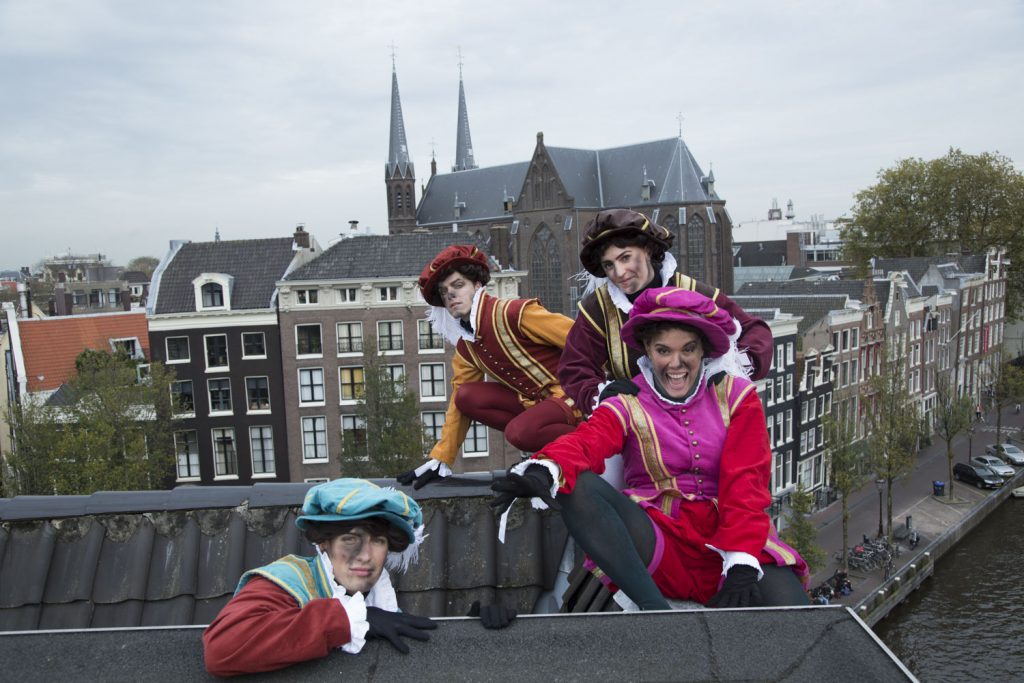