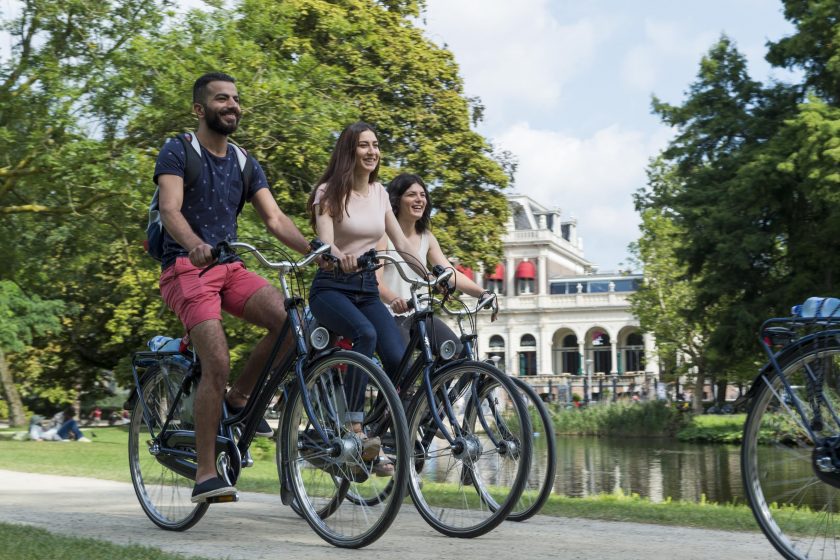 Safe Cycling in Amsterdam – The Dutch and their bikes ! It is so easy to get around Amsterdam on a bike. There are famously more bikes than people in Amsterdam. That’s how all cities should be ! More bikes, less cars, less pollution and all the health benefits of cycling hundreds or thousands of kilometres every year. We hear the local council is preparing to reduce car parking spaces and increase the number of places to lock up our bikes ! We salute that ! They also just put a blanket ban on all diesel and petrol cars from 2030. Again, my kind of town.

Cycling is healthy too ! In the uk there is an obesity epidemic with school children. In The Netherlands, the majority of school children cycle to school. You don’t see many fat Dutch kids around. The babies and infants are taken by bike with their parents to creches and kindergarten. It is part of the Dutch lifestyle from cradle to grave.

Also in the uk, bicycle sales have  been growing as people want healthier lifestyles and to offset car fuel cost rises. It is not ingrained in the culture though and there exists a mutuel hatred between cyclists and drivers as they fight for road domination. In the Netherlands, all the drivers are cyclists themselves, their kids, their family, their friends, all cyclists, This means they respect and look out for cyclists. 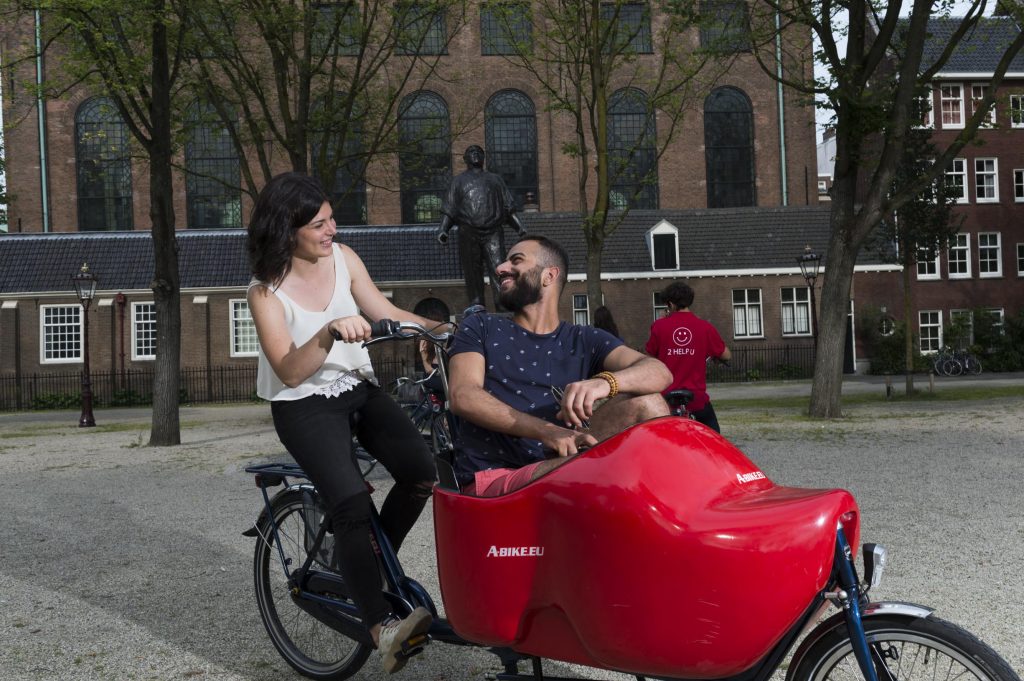 Expats and Safe Cycling in Amsterdam.

What about us expats, internationals and tourists ? Well, if you move to Amsterdam, as sure as day follows night, you will get a bike at some point. It can be a little daunting at first, but after a short while it feels natural and you get used to the ebb and flow of the road and the other road users. You still need to be careful, but you gain confidence and you feel safe and love the freedom the bike in the city gives you.

If you are an expat with kids, you naturally buy a bakfiets. It’s the sine qua non of the expat identifier. If you are a bit flash, you will get an electric one. Whichever you chose, it will be stolen at some point. It the expat rite of passage. However long you cycle in Amsterdam there is one skill you can never acquire : The innate skill of the anti-collision ABS cycling skill every dutch cyclist has. That micro second needed to swerve past any obstacle at the very last moment and avoid an accident all the while using a mobile phone.

So how do you stay safe cycling around Amsterdam ? There are a number of factors you need to take into account and these apply to tourists and locals. Just because you have lived here a while you are not accident-proof. If anything, you might become over confident and more likely to have an accident. So let’s look at the practical and the obvious.

What condition is your bike in ? Is it new ? Second hand ? Have you had it serviced recently? So many questions…. Well, it all matters. Having a bike in good condition and in full working order means you can travel further and in greater safety. If you are renting a bike at one of the many bike rental companies, it is most likely in good condition and checked regularly. The same should be true if you are using your own bike. 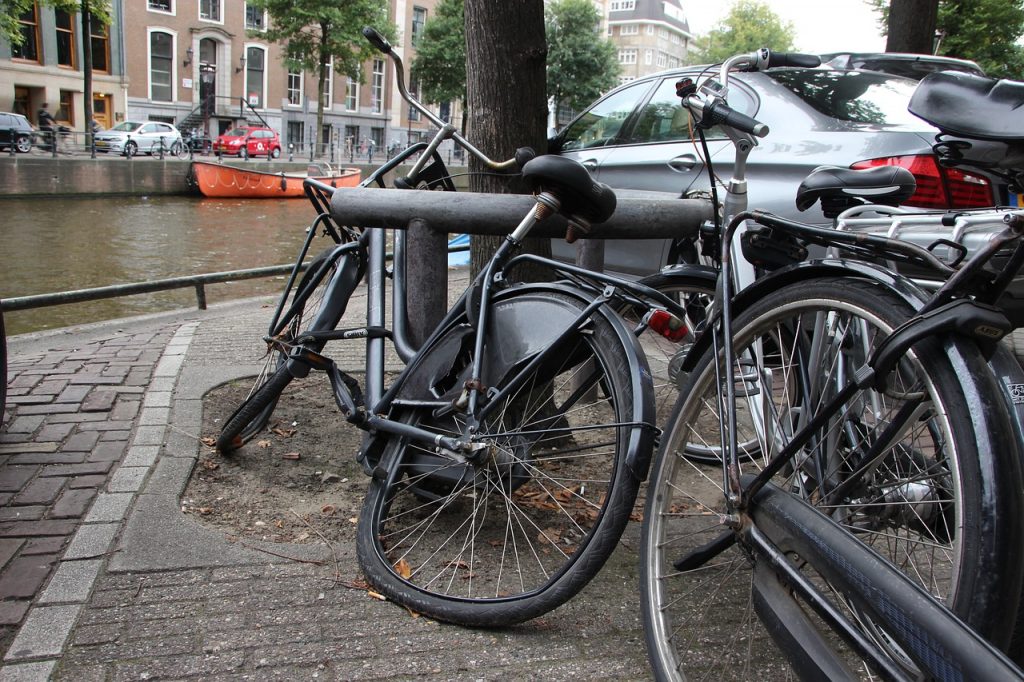 Stating the obvious….do the brakes work properly ? Only last week, the cable on the right hand brake broke. These things happen. It is important. The cycle paths in Amsterdam are often invaded by walkers, tourists, dogs, children and all manner of other obstacles you will need to avoid. Do you even have hand brakes ? Many Dutch bikes just have the back pedal system. You pedal in reverse to stop the bike. That’s fine if you grew up with it. However, if you are new to that, be careful. You might find yourself grabbing thin air with your fingers when you need to brake in a hurry.

Do your lights work ?

Seems an obvious one, but are you obvious cycling at night ? If people can’t see you then will walk out in front of you and that will be your fault. Same goes for cars. Can the drivers see you ? Don’t take chances because you forgot to change the batteries in your lights. Make your self visible at night. Get nice bright lights on your bike. Be safe, be seen. Lots of drivers are unfortunately using their phones while driving. If they are not concentrating and they can’t see you, that is when accidents happen. Also, if the police catch you cycling without lights you will be fined. More on the new fines system below.

Do you have a bell ?

A good bell is worth its weight in gold. In Amsterdam its main use will be to attract the attention of people you know that you see in the street. This is a village after all and you will be seeing people you know in the street on a daily basis.  All cyclists have to be on constant alert from a number of ‘threats’ – cars, other cyclists, trams, buses, etc but the worst enemy is pedestrians.

The bell will be used to tell pedestrians to get off the cycle path or road. Or, as often happens, to remind pedestrians not to move off the pavement as their movement and body language seems to indicate that they will do just that. They cannot hear you, so they put a leg off the pavement, but a heavy “Dring, dring” soon reminds then to change direction. Add a mobile phone into this scenario and you have a recipe for disaster. Because everyone knows that a mobile phone make you unbreakable, right ? The main message is to stay on high alert.

If you are visiting Amsterdam, renting a bike is a must. It is part and parcel of the Amsterdam experience. It is perfectly normal for tourists to want to join in on the bike fun and add an authentic memory to their stay. Can you imagine them coming to Amsterdam and not doing a canal tour ? Or seeing the red light ? Or not going to a coffeeshop ? I mean, it happens of course, but renting a bike is a a ‘given’ for most tourists. They are usually easy to spot because they look so nervous. what’s to be nervous about ? I say to people, just be careful and cycle like you would at home.

Nothing is risk free. Figures just our show that there were over 200 deaths of cyclists in the Amsterdam area last year alone. A lot of that was attributed to e-bikes that can go much faster and so are more dangerous. Even so, accidents and deaths are a regular occurrence, so please be very careful. Wear a helmet if you feel you need to. Friends staying this week went over the handlebars as they drifted the front wheels into the tram lines. Easily done and it can end badly, so again, be careful. 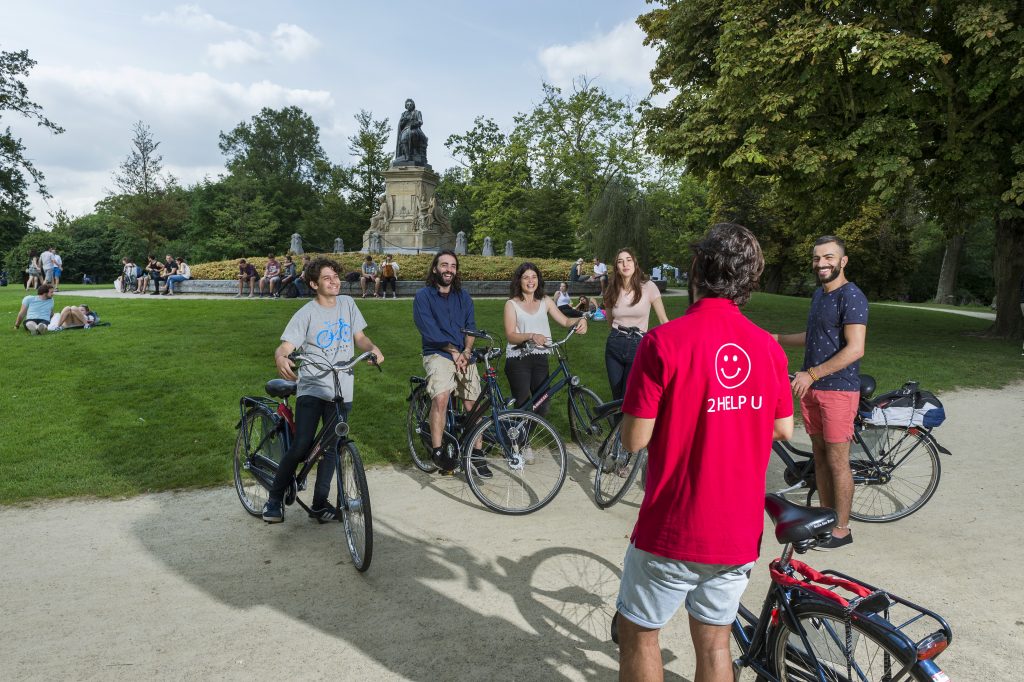 Amsterdam sometimes feels like the zombie apocalypse on wheels. People are riding around and staring into their phones. What exactly are they looking at ? PHD data analysis from the CERN collider ? Political analysis of the Brexit mess ? No, they are reading and replying to the latest brain farts from their friends. There are hordes of young people cycling around barely looking where they are going. And, as if that is not bad enough, there are loads of car drivers doing exactly the same. In a microsecond, lives can be altered forever and bad accidents are happening.

If you need to reply urgently to a message, pull over and do it from a stopped position. Same for looking at maps to find your destination. Nothing is more important than your safety. Over 200 hundreds deaths….just reminding you about Safe Cycling in Amsterdam. Do not become a statistic. Which brings us nicely to the topic of fines.

The new fines system for bikes

Just recently, a new system of controls has been put in place and honestly, it is a good thing. I have seen cyclists wiped out by cars and trams as they run red lights and zebra crossings. There has to be an evolution of controls as an ‘anything goes’ system has run its course. From the 1st July there will be on the spot fines of 95 Euros. Local government hopes that will reduce accidents as 20% of accidents last year involved mobile phone use. There is a 100 Euros fine for cycling while drunk. Do you want to save time and run a red light ? Well, if caught that will cost you 95 Euros. The list goes on.

Two words : Common Sense. Despite the number of deaths of cyclists, Amsterdam remains a relatively safe city for cycling. You just need to be aware of yourself and what is happening around you. Locals cycle with absolute confidence, but that doesn’t make them invulnerable like Superman. They are used to how the system works and they know what works and what doesn’t. On balance, they are probably more likely to run a red light due to bad habits. Tourists however, need to be more careful as they do not know how it all works. Rental companies know this and give the general lines of conduct to be respected. You do see some tourists doing some weird things though. Not all of them for sure.

So there you have it about Safe Cycling in Amsterdam. No need to be paranoid. Just be aware and……put your phones in your pockets ! If you need to rent bikes in Amsterdam, check out our bike rental partners in Amsterdam.

And for bike repairs, check out Bike City repairs Amsterdam.

Other local blog articles are here.