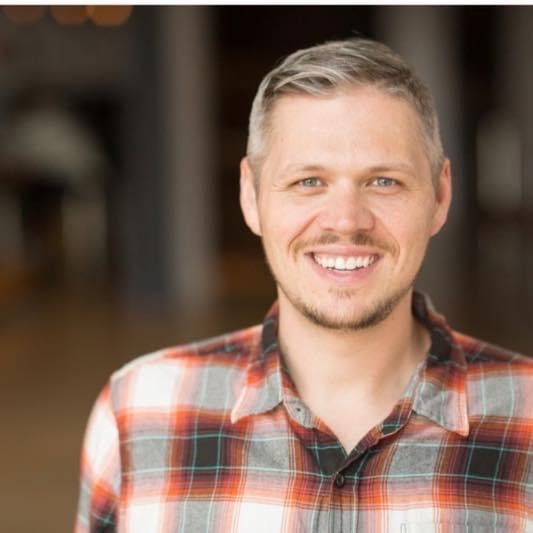 Interview With Amsterdam Comedian – There has recently been great news for fans of the ‘living spectacle’. The actors, the comedians, the performers, the artists, the entertainers and behind the scenes staff are mostly back. Theatres and comedy clubs have been able to welcome back the public and host shows for their viewing pleasure. People crave entertainment and when there is a void, the desire to see it just grows and grows. And, if anything, if there is something we all really need after the last few months, it is a good laugh.
Over the last few years, the Amsterdam comedy scene has gone from strength to strength. There seems to be an endless list of quality shows at venues such as: Boom Chicago, Toomler, The Comedy Café, De Nieuwe Anita, De Meervaart and many more. There are also a lot of events that pop up in bars and other venues around Amsterdam. The list seems as endless as the demand for entertainment. This is great for Amsterdam and its international community. 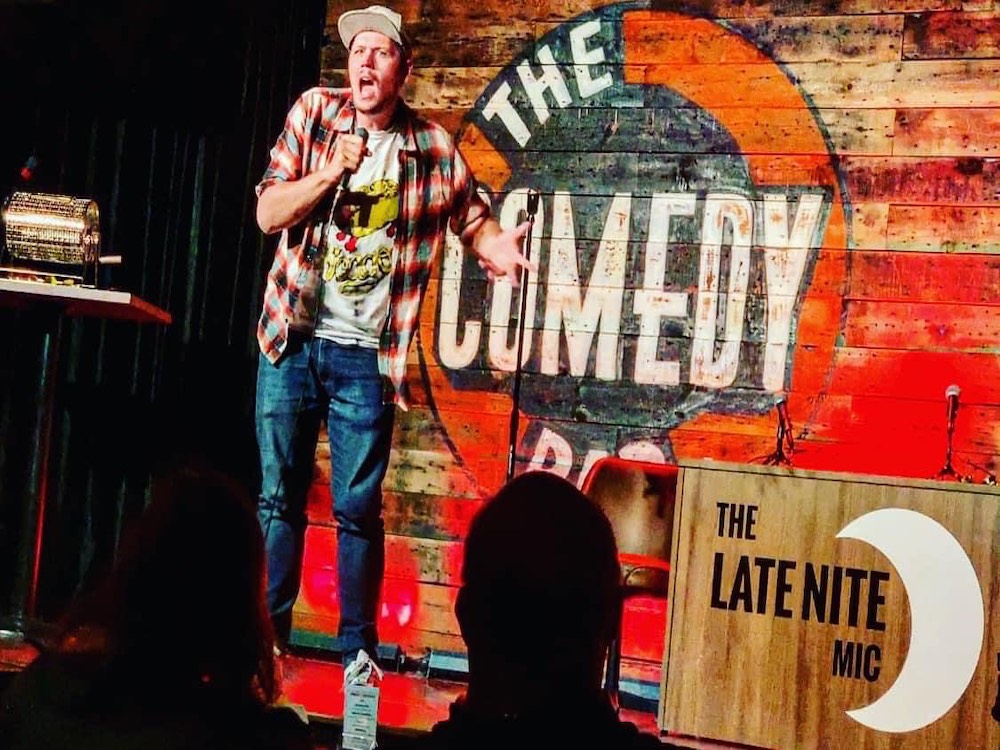 Before the lockdown, I was in the audience at an open mic night. It was great fun seeing local talents trying out their material. The revelation of that evening for me was the MC, Matt Castellvi. He ruled the room with the unshakable confidence of a seasoned pro and the laughter was thick and heavy. As he hails from Cuba and Chicago, I thought he must be a visiting performer and did not expect to see him again. Just recently in a post lockdown show, Matt was MC’ing again. As he is involved in the Amsterdam comedy scene in a more permanent fashion, I thought it would be good for him to be the subject of one of our ‘Local Expat in the Spotlight’ articles. Matt has kindly taken time out of his writing and performing to answer our questions for this interview with an Amsterdam comedian.

Q1. So Matt, please tell us more about where you are from and how you ended up in Amsterdam.

Hey David, so I’m from Chicago and have focused my life on comedy since I was 18.   In Chicago that was easy, it’s a comedy town built by comedy legends like Chris Farly, Bill Murray,  John Belushi, Tina Fey and so many others.   I studied at Second City and The iO theatre for improv and eventually was lucky enough to perform on those stages professionally.   From then on, I was doing shows 4-5 nights of the week for sold-out audiences all over the city.  Improv led to more improv, then to musical improv, then to sketch writing and then finally to standup.  I won the best standup by the Chicago Reader and I never thought I would leave Chicago but then I met my fiancé.  A notable musical improviser herself, my fiancé and I began performing together and toured all over The US, Australia and Europe.  Of the countries we visited, we came to The Netherlands and got to perform at the legendary comedy theatre Boom Chicago.  We were blown away by the city the culture and by Boom and privately talked about how if we ever had a chance to live anywhere that wasn’t home, it would be in Amsterdam.   However as luck would have it, Boom announced they had openings in the cast, they asked us to audition and before we knew it we were on an 8-hour flight to The Netherlands.  We officially moved here in November 2019 and we haven’t looked back…mainly because it’s 2020 and if we look back now everything is on fire. 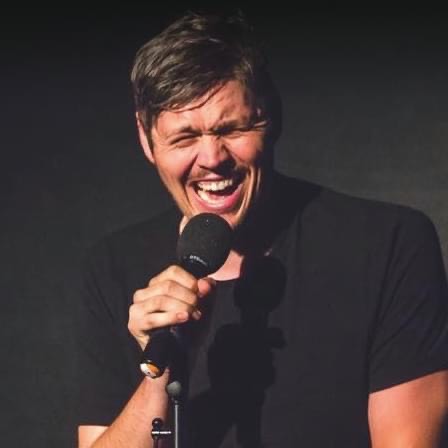 Q2. I see from your website that you have over 15 years of experience on the comedy circuit in the US. Please give us some insights into the life of a comedian. Was it a calling for you?

Very much so.  In all honesty, I can’t remember a time when I didn’t want to do comedy.  It’s strange in some respect, I just knew from a very young age that this is where my life was going. I didn’t want to even think about doing anything else.  I would be in school and be like “When am I gonna need Algebra when I’m gonna be telling jokes in truck stop bars across the Midwest?”    Telling jokes, doing impressions, improv; these things were the only thing that I was good at and gave me purpose.  No matter what had happened to me, as soon as I got on that stage I felt comfortable and like I was truly myself.   Maybe comedy HAS to be a calling because the road to get there is so hard.  All the hours and rejection and doubt, sometimes  I don’t know if I would wish comedy on my worst enemy.   It would be way easier to just really like accounting.  When you’re an accountant, I doubt you have to worry someone is going to get drunk and fight you while you’re doing math.  For me, however, once I experienced the rush and energy of doing a great show, I couldn’t go back and fold sweaters at Old Navy.  There’s nothing like making people laugh and I was willing to do anything to follow that dream and be a comedian and I’m glad I did. 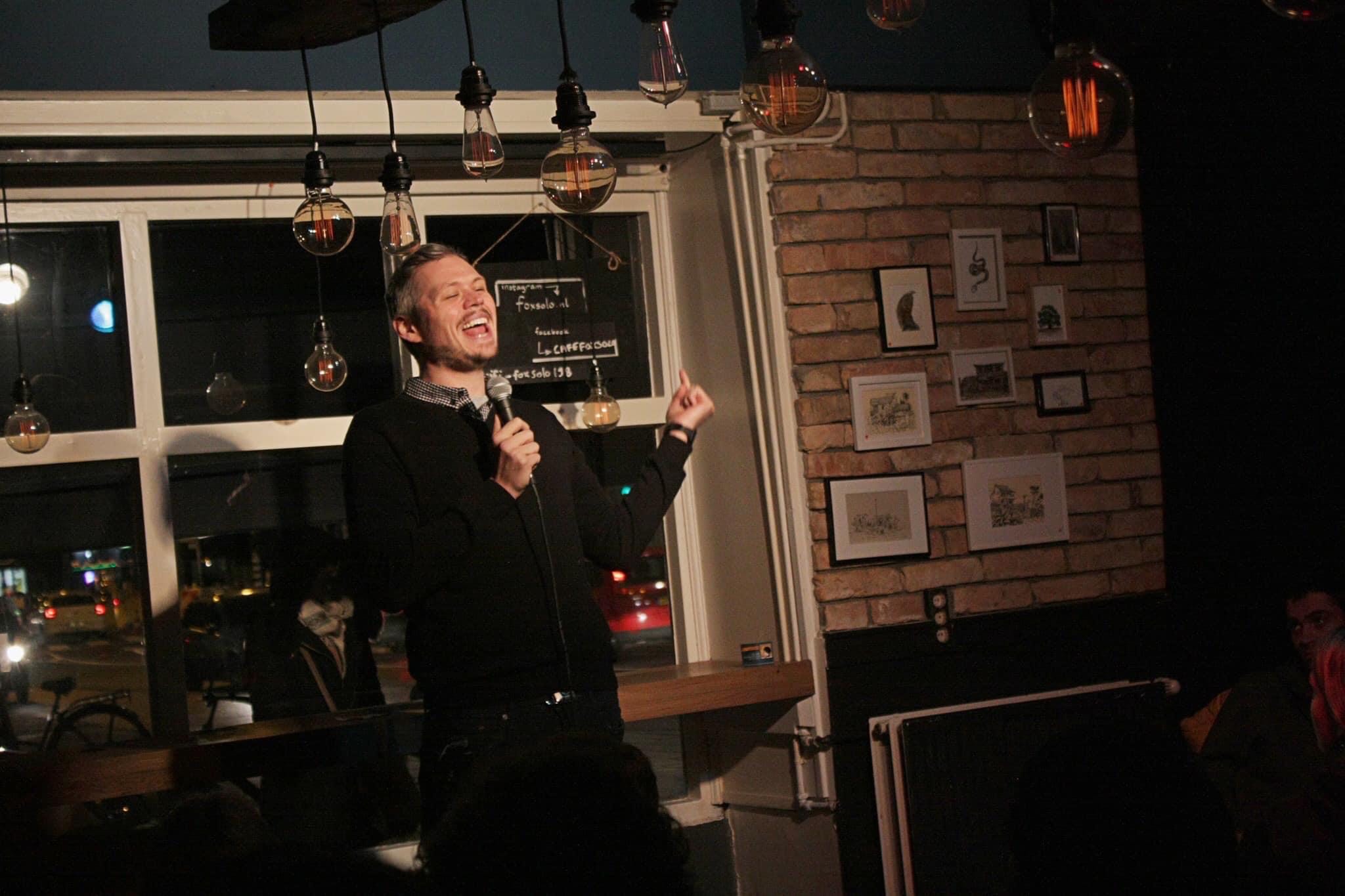 Q3. I follow you on Facebook and I see you are very active on the Amsterdam comedy scene. How do you see the local scene as a performer?

It’s quite different from back home, for sure.  I come from Chicago where there’s a comedian on every corner and a show in everyone’s basement.  If you wanted to perform,  you had to hustle because there were 500 comedians just like you ready to take your place next in line.  In Amsterdam, it’s not like that.  Probably the drugs.   There isn’t that cutthroat me-first American mentality.  Comedians respect and help each other and promote each other.  In my experience, a comedy community thrives when it fosters more comedy opportunities for others.  And the more opportunities beget more comics, which beget better comedians, which is what drives me to write better.  I look around the Amsterdam comedy scene and I see so many amazing comedians from so many different walks of life.  I feel so lucky to be a part of the scene, as I know in the next couple of years it’s going to be the epicentre for international comedy in Europe.   This is great for me as a performer because I love performing for a Dutch crowd because they say if you can make a Dutch person laugh, you can make anyone laugh!…except the Germans. 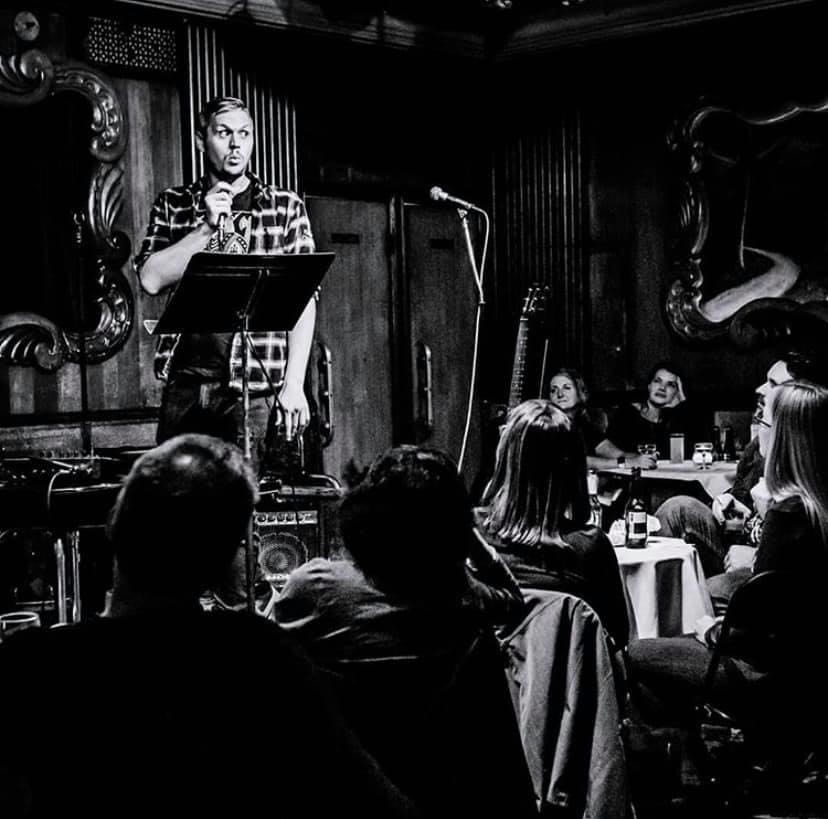 Q4. I imagine you are happy to perform once again. How does a comedian and performer keep busy in times when they cannot as was recently the case?

Weed.
No, but seriously, it was very difficult for me as a performer.  I can’t speak for anyone else, but I have a deep need to be on stage. Truth be told, at the time of the lockdown I hadn’t had a weekend without shows in over 5 years.    So I wasn’t really sure what people did on weekends.  Badminton?    Fishing?  What?  Gimme a hint!   I felt bored and restless.  I remember just being at home doing jokes for my fiancé as she tried to brush her teeth and regret being with me.  Comedy is a muscle.  You have to perform to make it grow and when that doesn’t happen the muscle dies.   You lose that sharpness, that quickness that comes from being on stage.  I was really terrified it could happen to me.   So I tried doing virtual zoom shows, corporate online improv but…  it just wasn’t the same.  You really need that live audience interaction so you know how your material is landing.  I remember being hopelessly depressed some of those days. I was unsure if the one thing I like to do would be gone forever.  It felt like my future had been stolen from me.  It was rough.  At the same time,  I pray every day and thank whatever higher power there is for having me go through this pandemic in Amsterdam, and not America.  It would have been really rough for this guy.  Talk about breaking up with a girl at the right time!  Phew.  Let’s get some bitterballen. 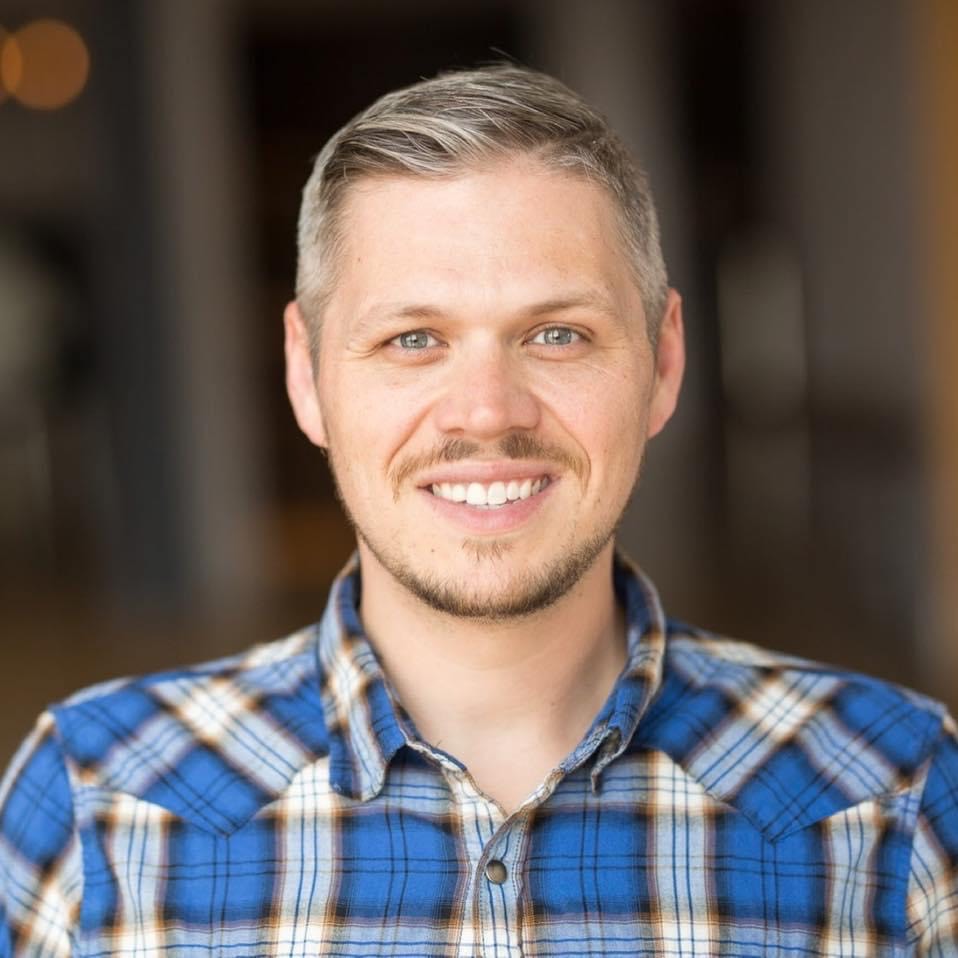 Q5. You also provide other services. Please tell us more about those.

Whatchu need man?  Apart from being booked as a standup or improviser,  I also teach.   improv, standup, character creation, creative writing and even how to rap.  People can hire me to write/perform tailored material for birthdays, bachelor parties, bar mitzvahs, weddings, and also corporate events.  I lead corporate workshops focusing on team building, diversity training and public speaking. I’m a professional MC and host and even a sports commentator and I even do company roasts, where i roast your boss and you watch and your boss pays for it.  It’s a blast!  Pretty much if you’re in a company,  have a company or just want company, I’m your man.

Q6. What’s next? Do you plan to stay in The Netherlands for a while? You have a big show starting in Boom Chicago soon with your partner. Please tell us more about that.

What’s next for any of us?  I feel like we’re all waiting with bated breath for the other shoe to drop, what with all this pandemic chaos.  If you told me that millions of flying scorpions invaded and they have rabies, I’d be like, “yeah sounds about right what with 2020 and all”.  But pending rabid scorpions, We’re planning on keeping The Netherlands as our home for a while.  Even if America wasn’t a Mad Max-style Hellscape,  Holland has got to be the best-kept secret on the planet Earth and we’re inclined to stay.  Plus, as you mentioned in September, we premier our new Boom Chicago show called SITCOM, a brand new show built around the ’90s.  It’s my first official written review for Boom Chicago and I couldn’t be more proud of the way it’s turning out.  I can’t wait to put it up and for people to see it.   I’ll also be producing more standup show in the city and in October I will be taping my first comedy special.   Even with everything going on around us, I have never felt more happy or optimistic about where things are going for comedy as a whole.  What a time to be alive. 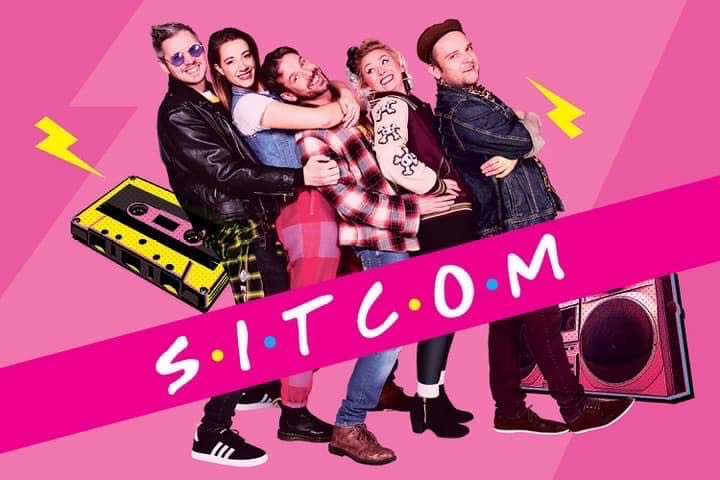