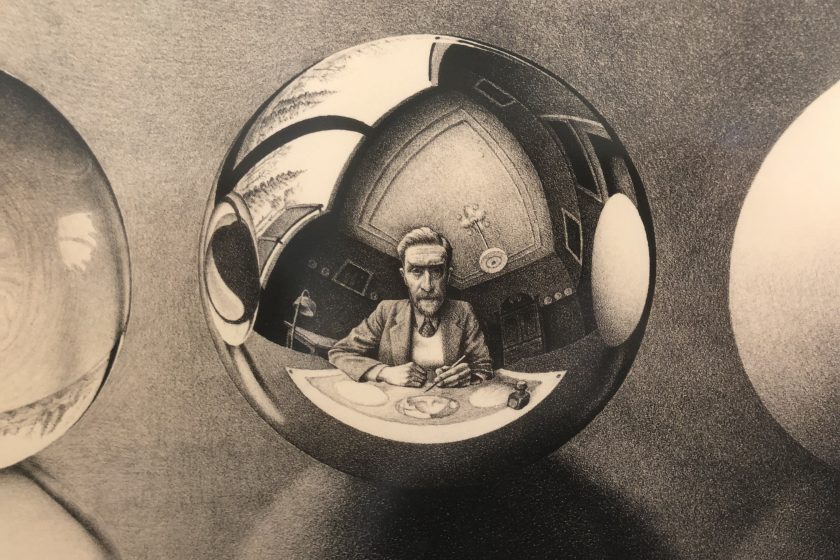 As part of our series to go everywhere and to see everything in the Netherlands, we recently did a day trip to The Hague. Of course we have been to this fabulous city before, but any reason to come back is a good one. The intention this time was to visit 2 museums: The Mauritshuis and the Gemeente Museum. The Mauritshuis is always a pure joy to visit. It is packed with beautiful artworks and the rooms and the building itself are beautiful.  The Gemeente museum was the next on the list, but we never made more 5 minutes walk from the Mauritshuis. It was there that we stumbled across Escher in the Paleis and decided to go in and have a quick look.  The best laid plans of mice and men…needless to say the Gemeente museum will have to happen another day. 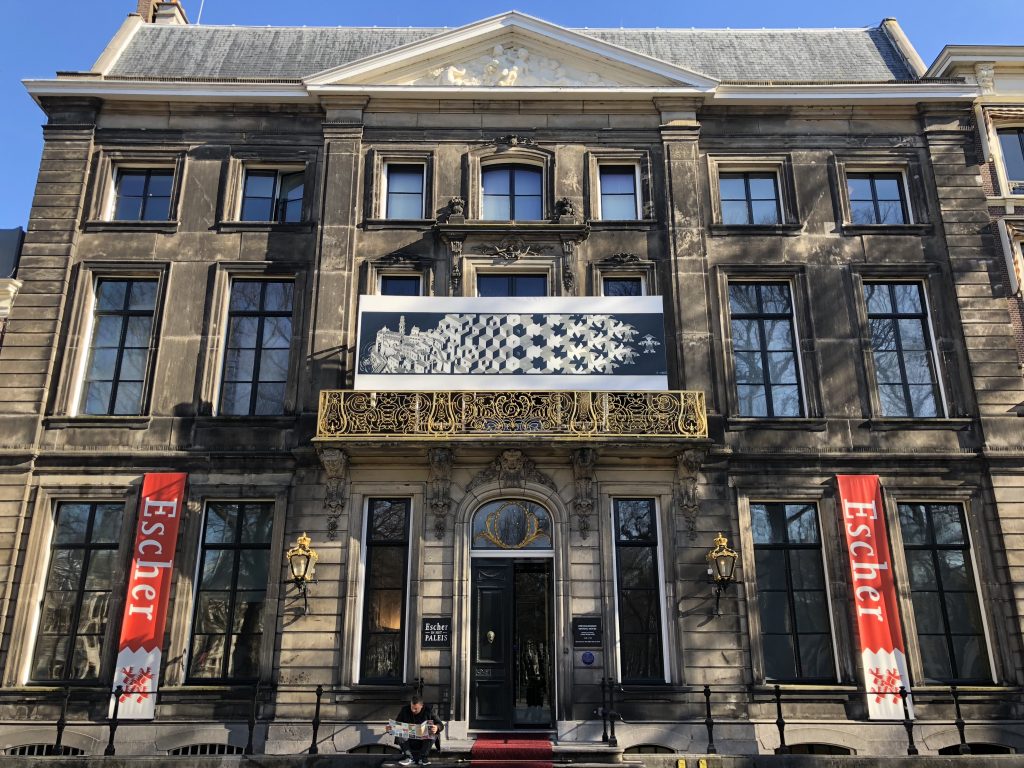 You’ll be glad you did…

I was surprised to learn the entrance was not included on the fabulous Museumkaart, but we thought ok, we need to see this, so paid the entrance fee and went inside. We were so glad we did ! You instantly enter the world of the artist and it is frankly captivating. The walls are all covered in his works and the explanations of his methods and workings are set out in a way that takes you on a visual journey into the mind of the artist. All this in the fantastic setting of the palace of the Queen mother. So who was he ?

Maurits Cornelius Escher was a world famous Dutch graphic designer and artist. His unique visual creations continue to enthrall viewers with his take on perspective, space and reality. His early work consists of woodcuts and drawings. You can see how he is fascinated by what he is creating and his desire to expand upon it. His later work includes incredible tessellations, metamorphoses and stunning optical illusions. 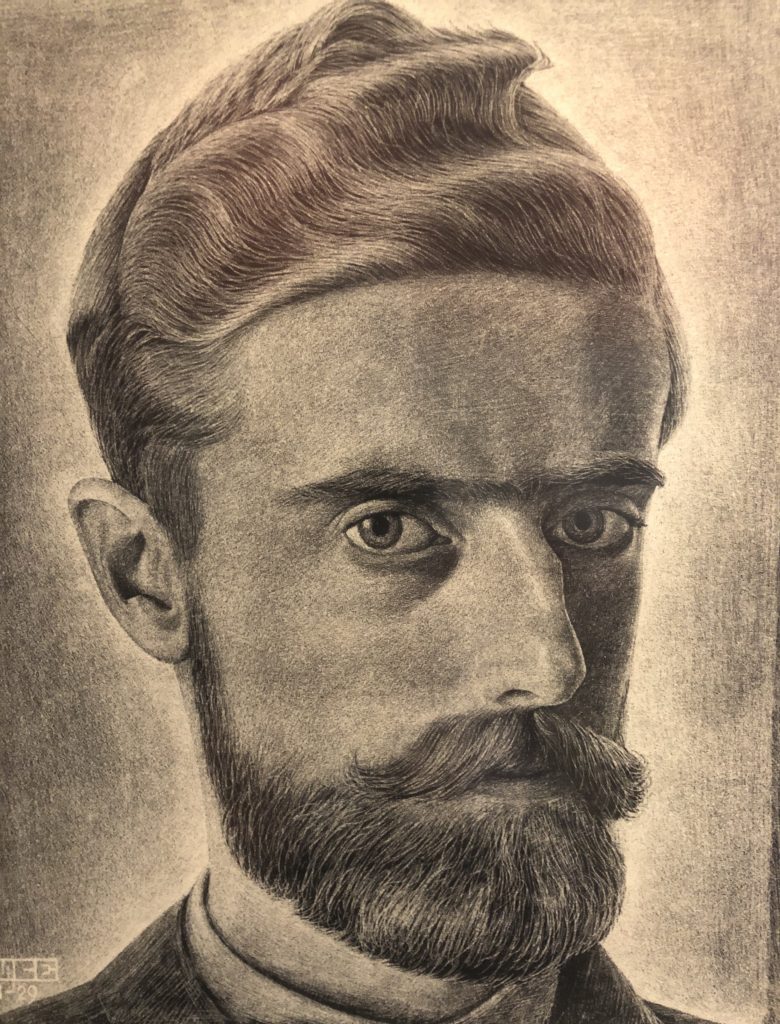 A stunnnig self-portrait. Does he remind you of anyone ?

The collection is huge. Room after room with the walls covered with his work, one more stunning that the next. The museum carefully details his methods, making the explanations easy for everyone to understand. Here are a few of our favourites. 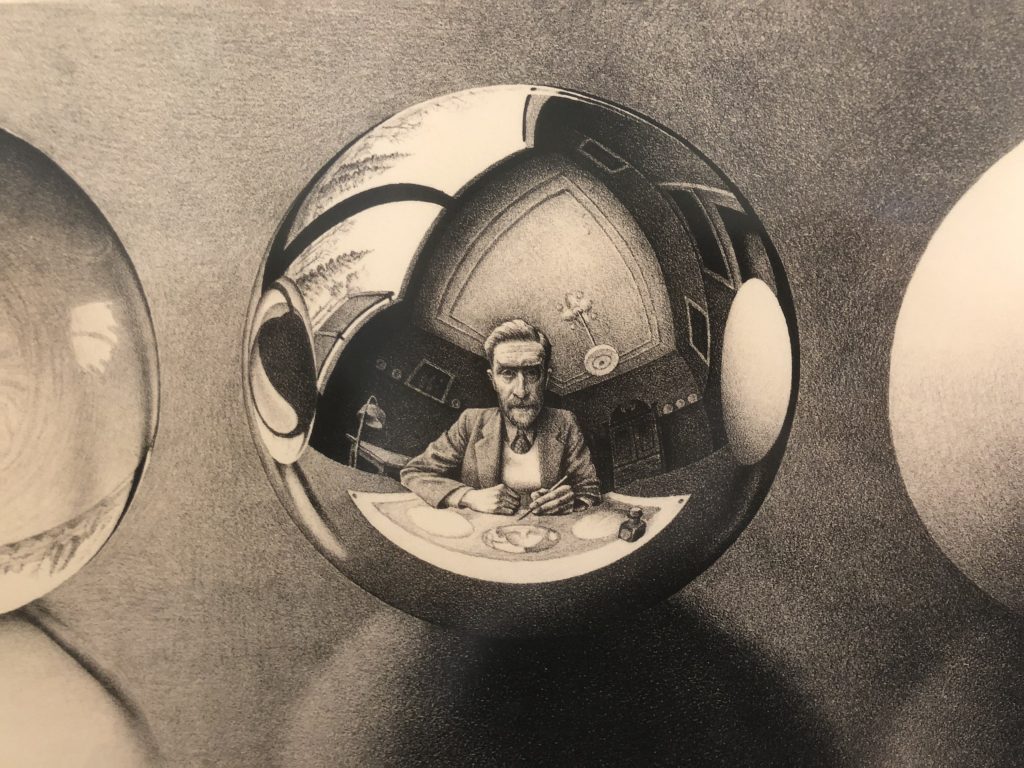 The perspectives are the kind of thing you might see nowadays created using powerful computers. 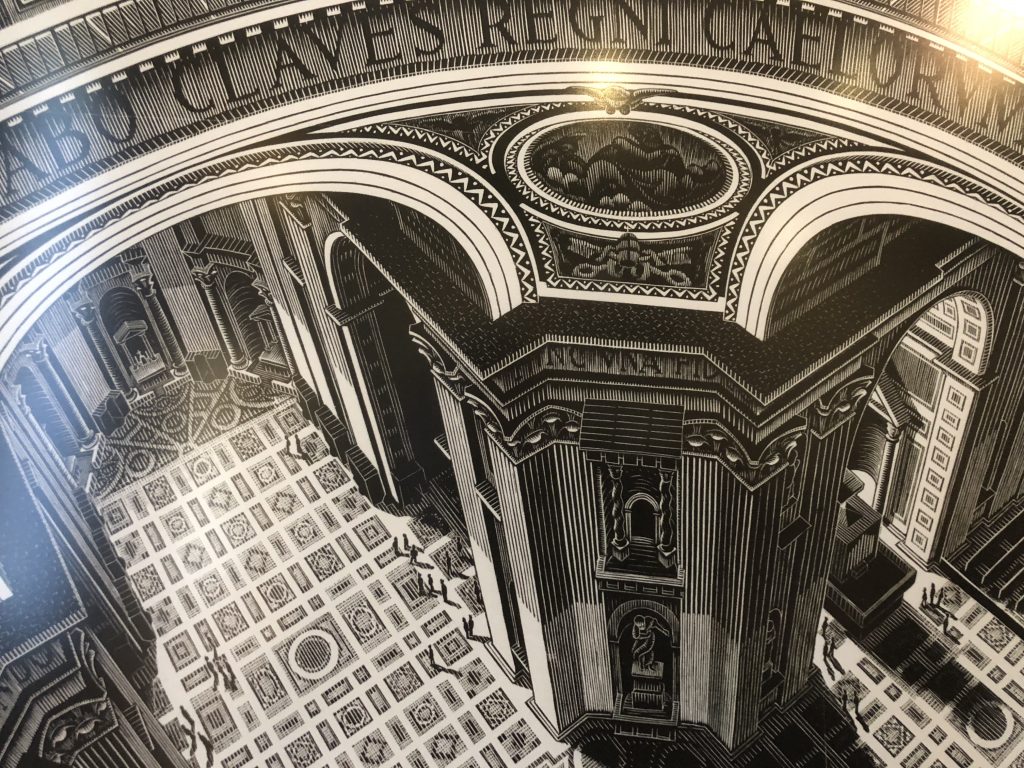 Other artists in the past had played with perspectives, but Escher took it all to a new level. 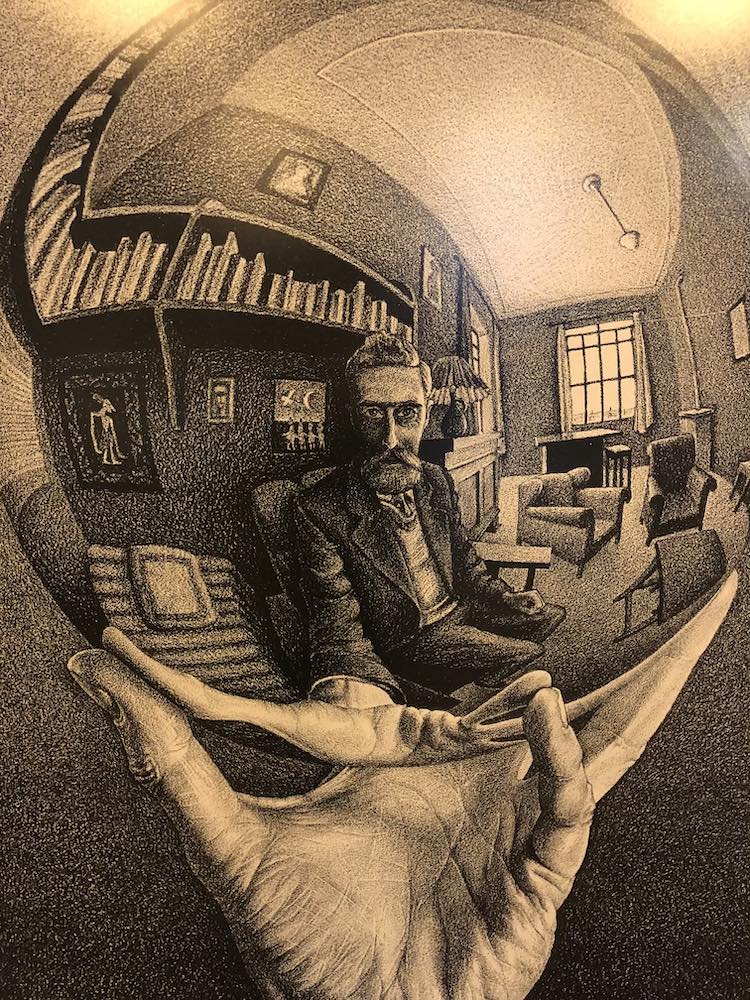 His work became famous the world over. That brought him an ever greater fan base and much praise.  It also attracted the attention of famous mathematicians who saw patterns in his work and they approached Escher on this matter. He explained his methods and the mathematicians showed him new patterns that they could see. This collaboration allowed Escher to think in different ways that led to new patterns and methods and a new variation to his creations.

Escher continued to explore his themes throughout his later life. He was appreciated, but the first major retrospective of his work only happened when he was 70 years old. He later moved to a home for retired artists in Laren and continued to create until his death in Hilversum in 1972

The next time  you take an flight from Amsterdam airport in lounge M, look up . There is a snaking 30 meter long Escher artwork above your head and it is beautiful. Most people are looking down at their phones and so miss it. Jammer…

For other exhibitions, you will find lots here.