A Day In Rotterdam 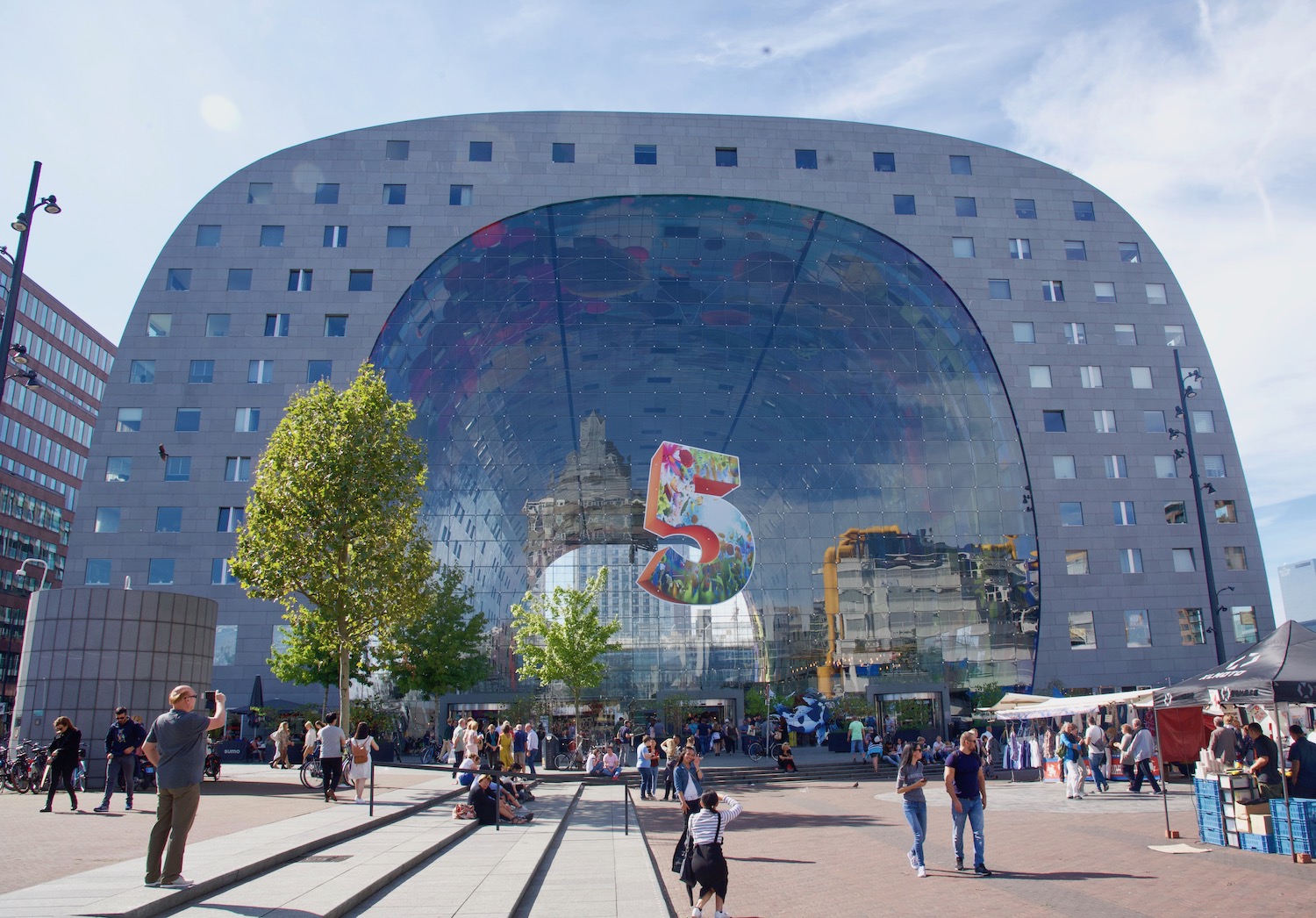 A Day In Rotterdam is always a good idea. So, on Sunday I jumped on my bike, cycled to Centraal Station and took a train to Rotterdam. Most weekends I go exploring as I have the Weekend Vrij subscription on my OV Chipcard. (more on this below). I jumped on the Intercity train. I did not know about the supplement. Luckily the ticket inspector was in a good mood and told me to get it for next time. Forty minutes of travel later and I was in Rotterdam. The station is quite an impressive building and this sets the tone for architecture in the city. Rotterdam was flattened during the Blitz of 1940. It was completely rebuilt from the 50’s onwards. The mix of buildings and architectural styles is impressive. 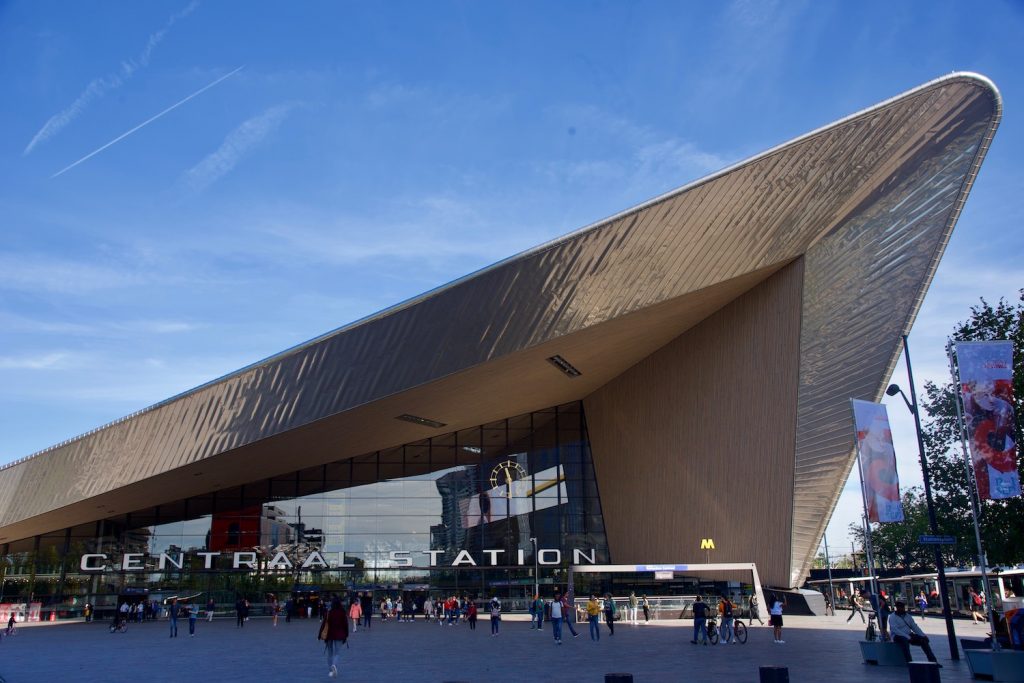 A 2015 article in the Guardian newspaper said of Rotterdam’s buildings :”If you put the last 50 years of architecture in a blender, and spat it out in building-sized chunks across the skyline, you would probably end up with something that looked a bit like Rotterdam.” 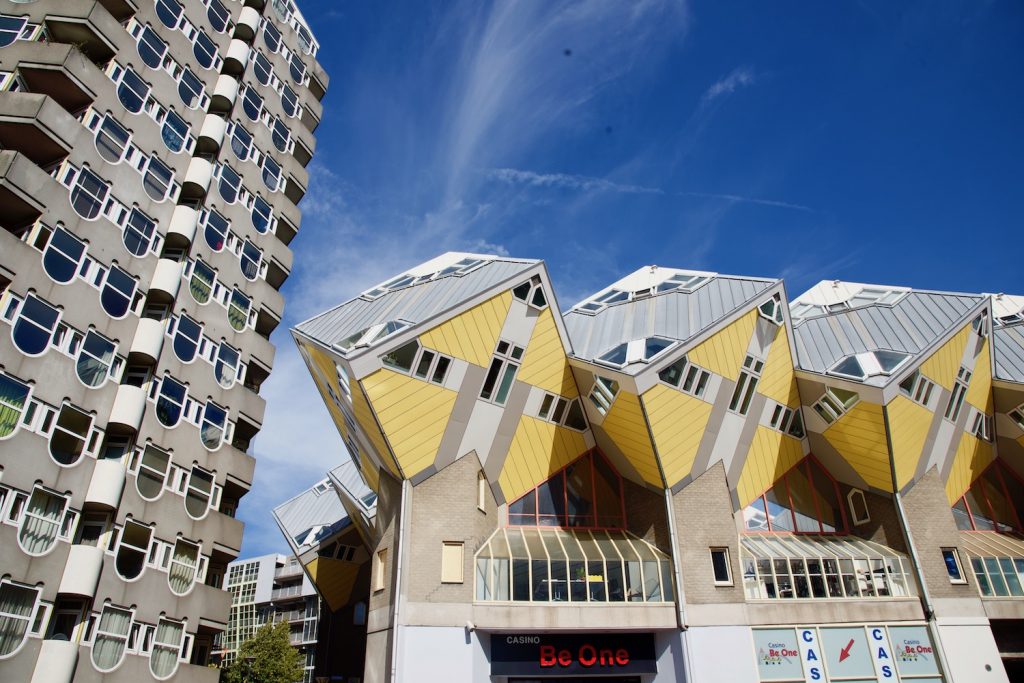 You might say that the chief planner is either a genius that needs to be helped or a madman that needs to be stopped. Somehow it works. In the 80’s and 90’s the singular aim of the city planners was to make Rotterdam a ‘lovable city’. Recognition of that achievement came in 2015. The city was awarded the honour of European City of the Year by the Academy of Urbanism. 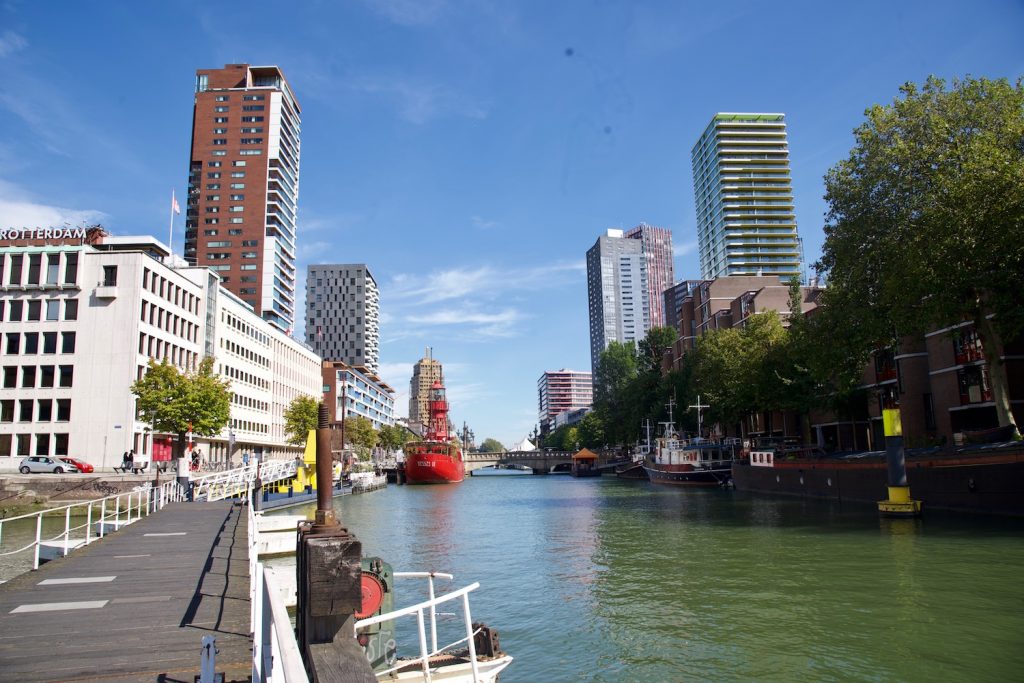 It is Europe’s largest port, but you never really feel like you are in a port town. A lot of businesses choose Rotterdam as their base. It has excellent transport links to pretty much everywhere. It is known as ‘The Gateway to Europe’. The population is just shy of 650,000 people. Large numbers of the population are from Surinam, Turkey and Morocco as well as many other countries. The vibe is very multicultural. 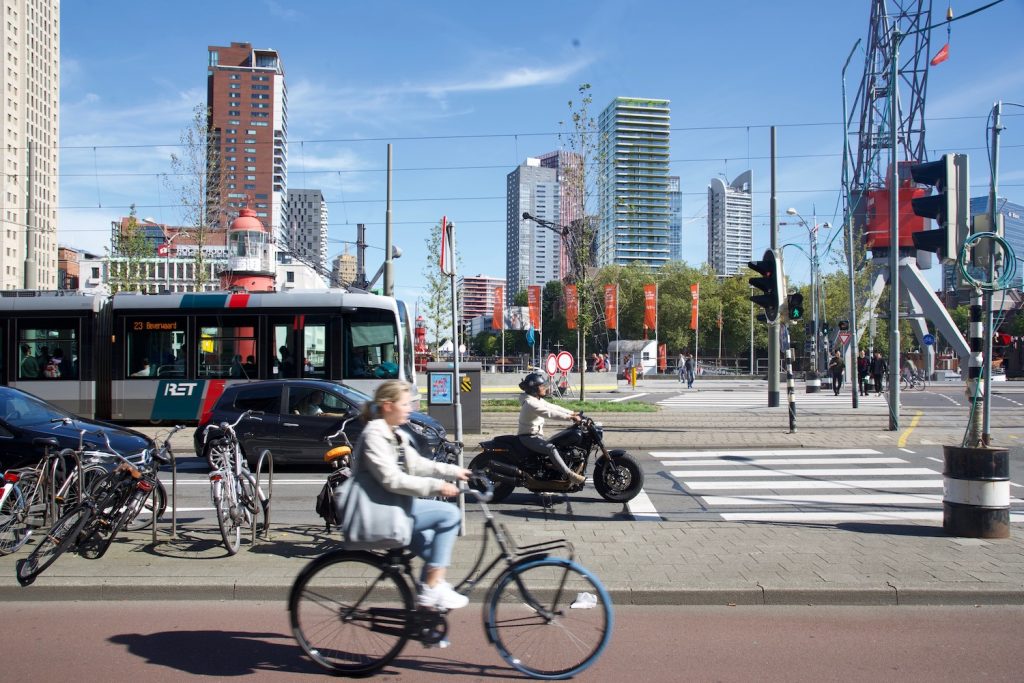 I came to Rotterdam with the intention of visiting three places. Firstly, I set off to see the Boijmans Museum. I have been wanting to visit this great art museum for ages. When I arrived, I got a very fast lesson in trip planning: The museum was closed. I should have done a quick check online. It is closed for renovation. It was interesting to see what they are building next door. A very cool looking new art museum will open in 2021 : The Depot. It will be covered in reflective glass. I cannot wait to visit that when it opens. You can read more about it here. 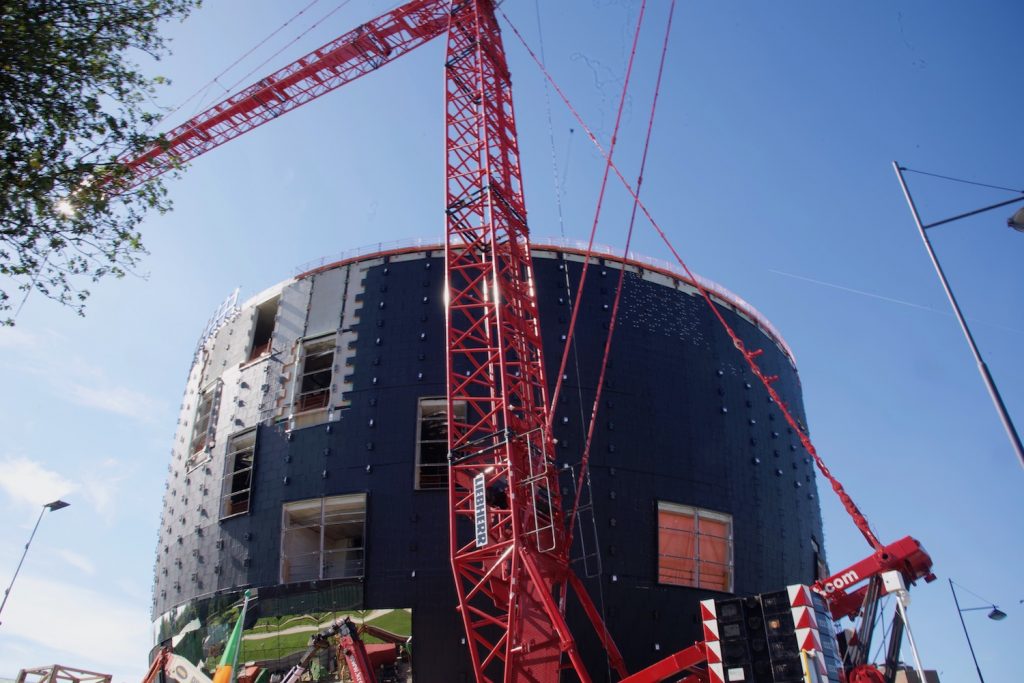 So having fluffed my first visit I set off to my next destination The Kunsthal. This is a fabulous building with many exhibitions on at the same time in different halls. I had mainly come to see the Joana Vasconcelos exhibition I had heard about. I stopped in all the halls to see what else was on. In Hall 1 was a really interesting show called Street Dreams (How Hip Hop took over Fashion). 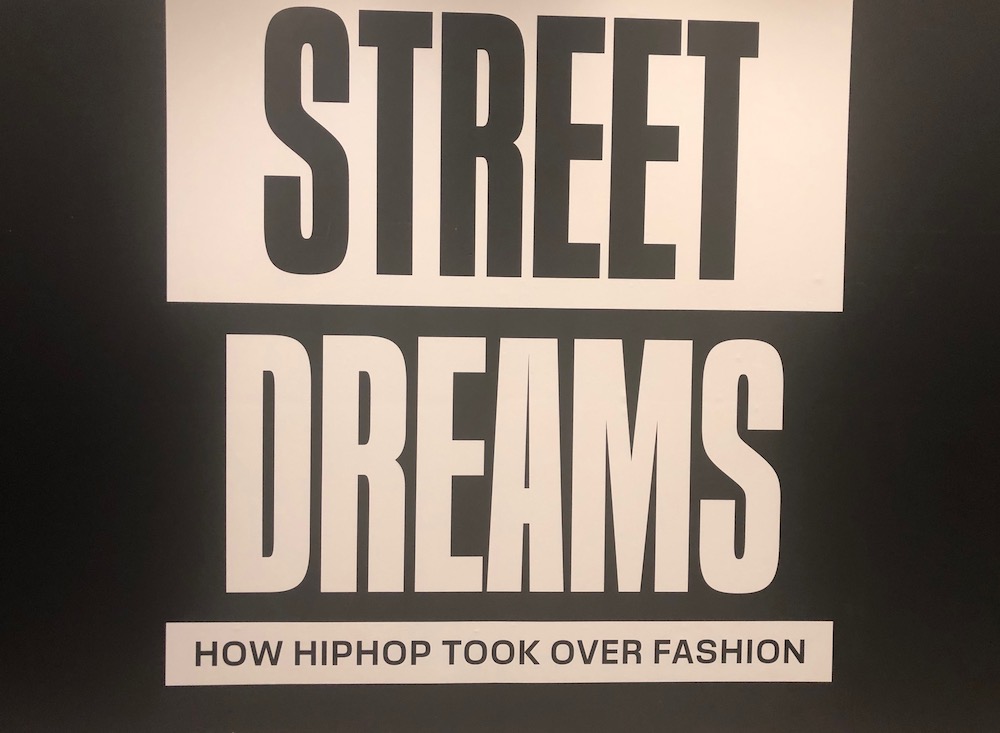 It is a very colourful story of how dance, music and clothing in Hip Hop have changed over the last 40 years. Lots of things to see. At one point there is a really cool film being projected on a huge screen. It is filmed from a van as it drives along a city street in one long take. You see different people in the film dressed in different street fashion related to Hip Hop and Rap. The music changes depending on the clothing style. The effect is really cool and I was thinking al the time, ‘Wow, New York is so cool!’ Then at the end, notice the signs are all in Dutch. It was filmed in Rotterdam. Street Dreams is now finished, but someone made a film about it and you can see what I saw at the beginning of this film :

Then I went to see the main event and it was stunning. Joana Vasconceos is a Portuguese artist. This show is called ‘I Am Your Mirror’ and is organised by the Kunsthal Rotterdam and the Guggenheim Museum in Bilbao. It is a large number of her sculptures and installations. All are large and bold and impressive. It is a joy to see. Here are some examples. the show runs until 17th November 2019. 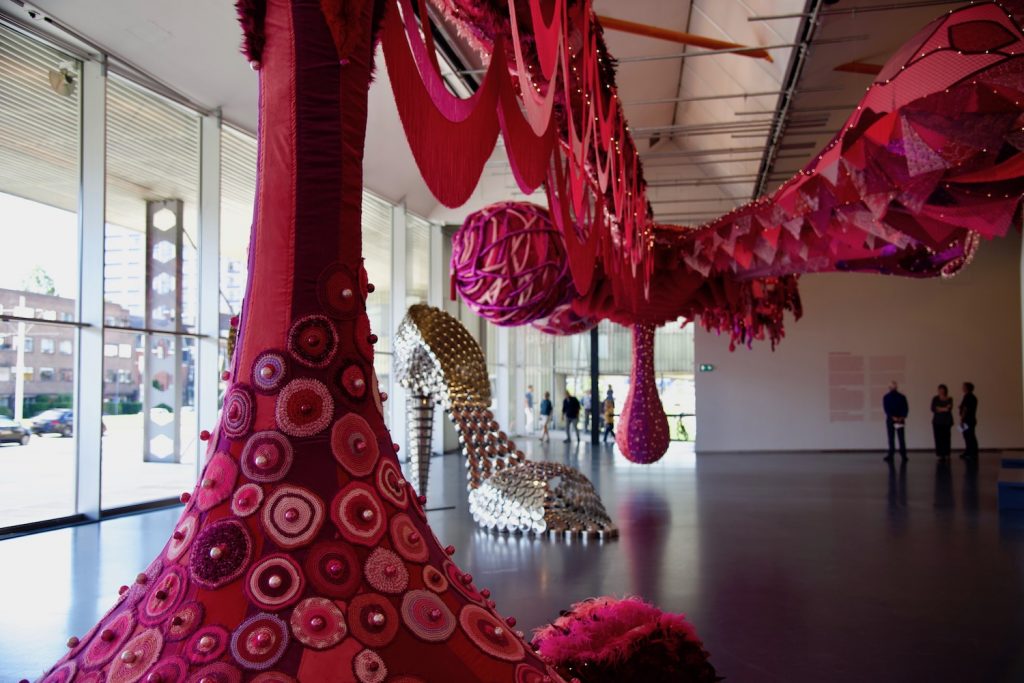 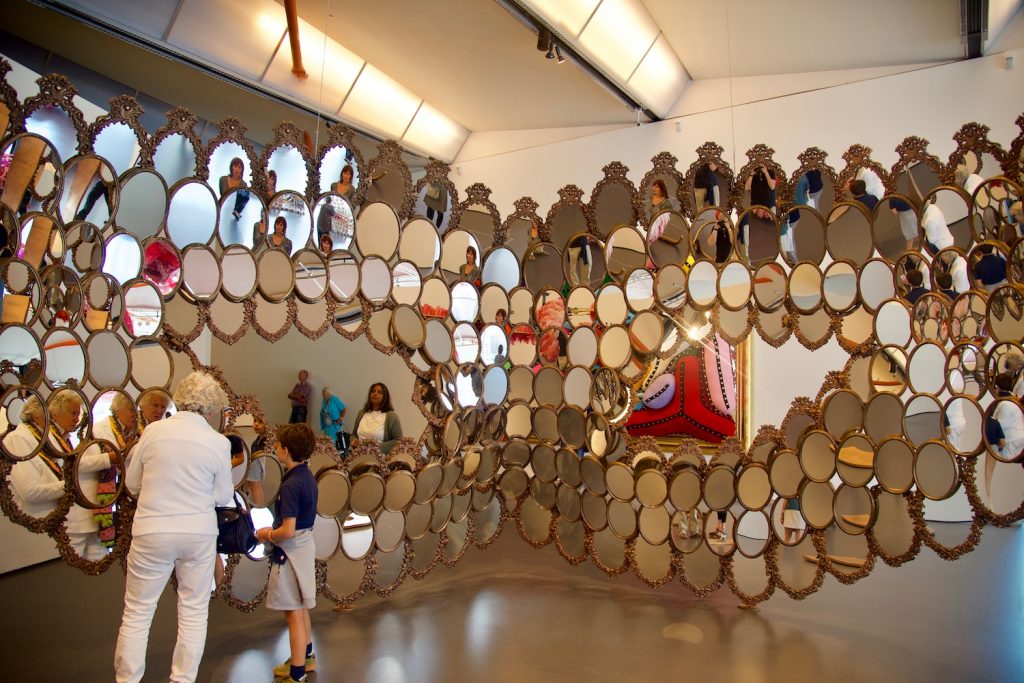 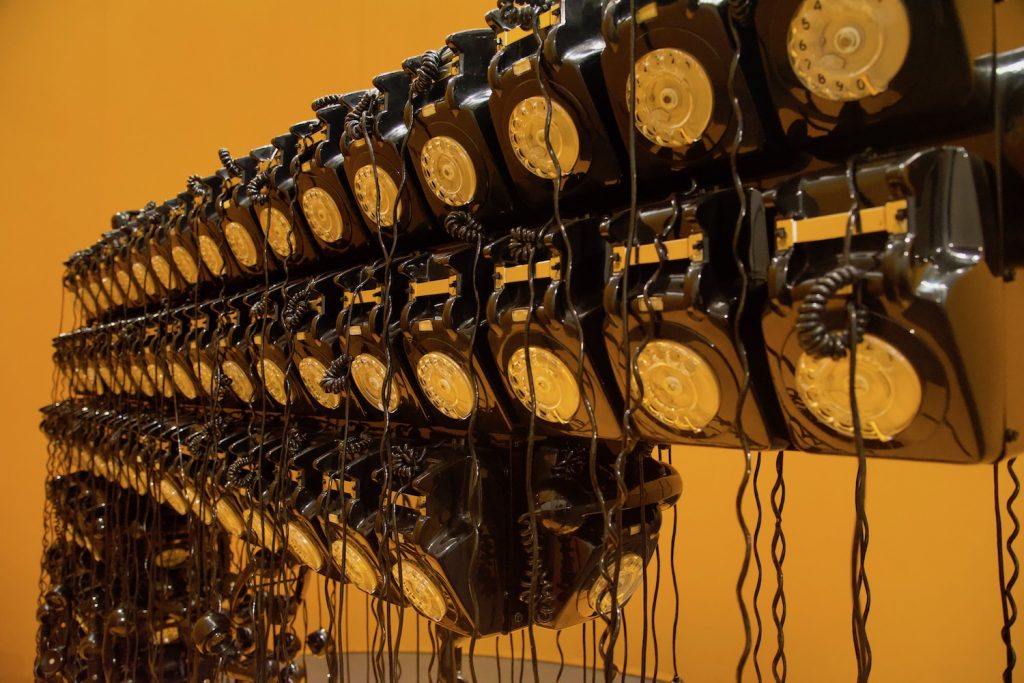 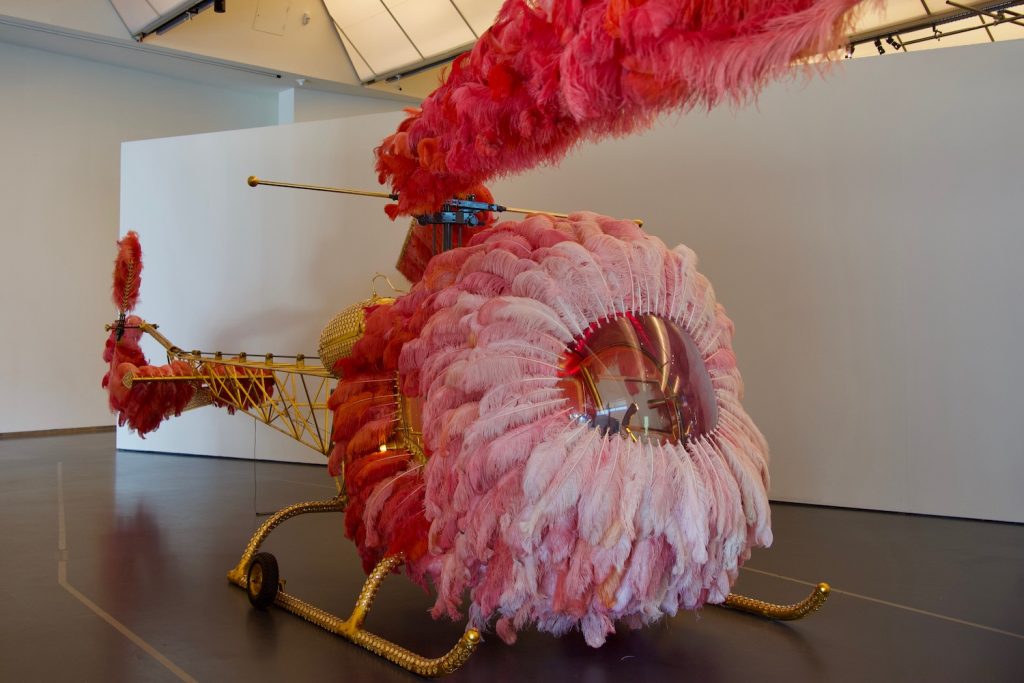 Then I set off for a nice walk around the city in the general direction of the Markthal. Walking around parts felt like being in London. Large impressive buildings dominate the skyline. Then around the corner, you are on a street with endless bars and restaurants with low rise buildings. That indeed felt like being in Greenwich Village in New York City. Maybe that is where they filmed the Street Dreams video I mentioned earlier. 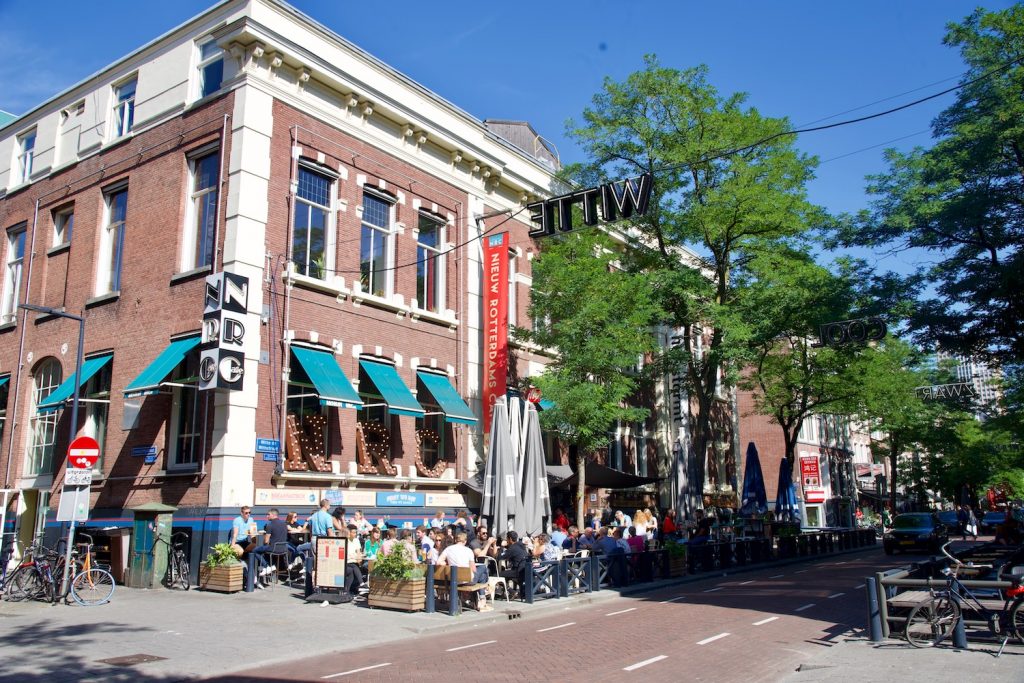 It is a really lovely city to walk around. Pedestrians, cyclists, cars, buses and trams peacefully coeist. It is easy to cover large areas of the city on foot as I did. I have been to the Markthal a few years ago when it opened. It is a really stunning building and is typical of the radical design choices that happen in Rotterdam. Next month it celebrates its 5th birthday already. 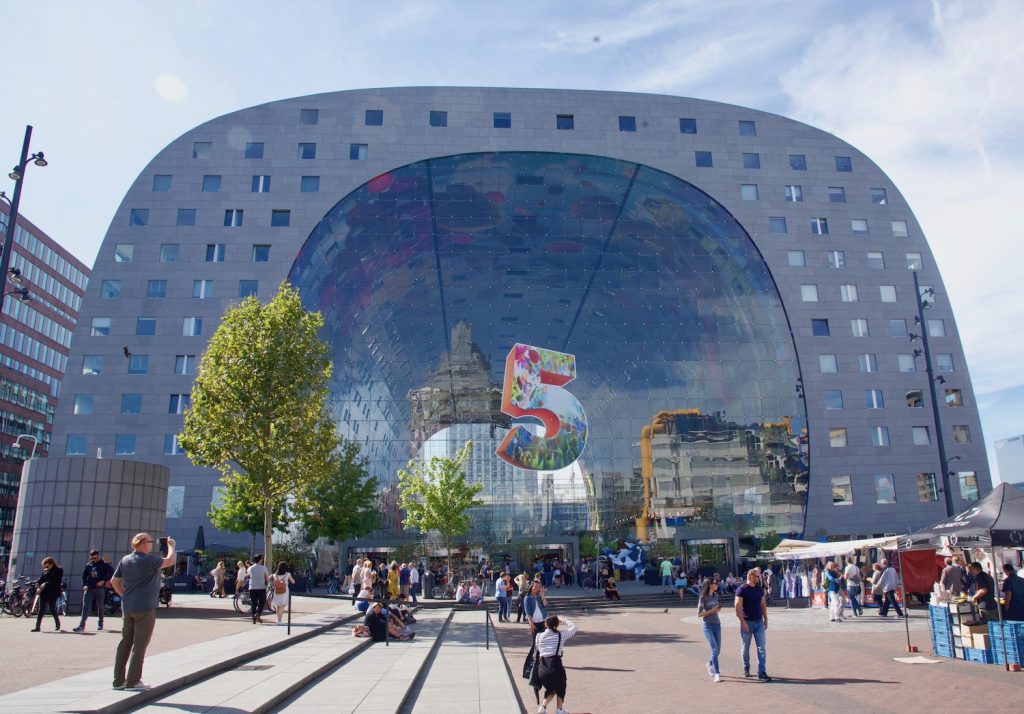 It is in the shape of a horse shoe. It is not only a food hall, which is its main attraction, but also has over 200 apartments contained in the walls and roof. The inside is really colourful. It was designed by the artist Arno Coenen, and named Hoorn des Overvloeds (Horn of Plenty). The images are of fruits, vegetables, seeds, fish, flowers and insects and covers 11,000 square metres. Some say it is the largest artwork in the world. 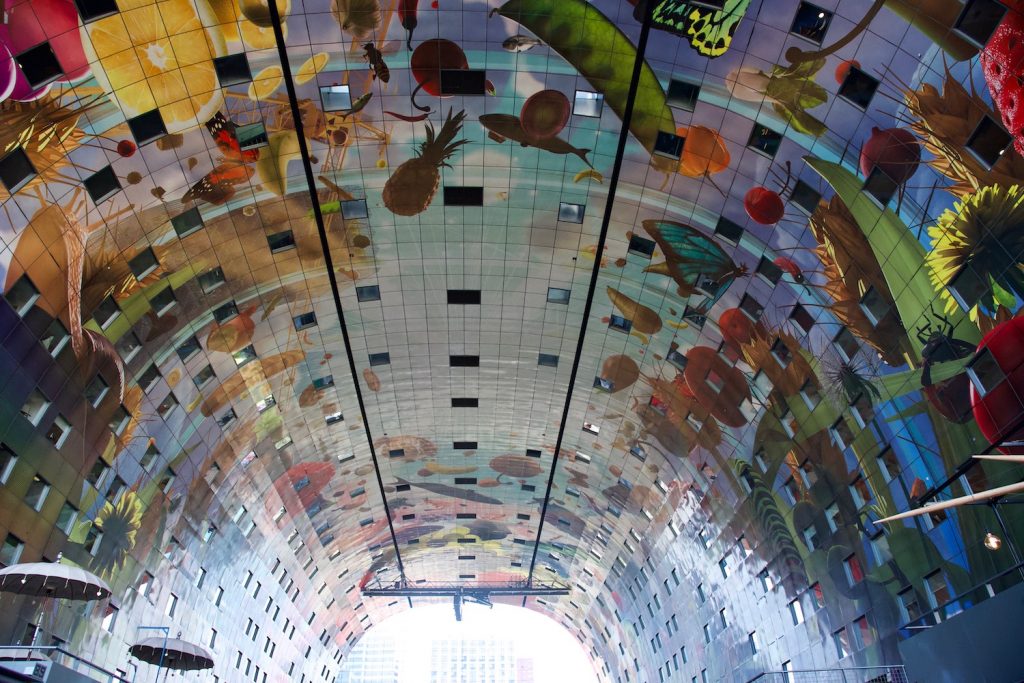 I had a few delicious snacks then headed back to the station to catch the Sprinter train (not the Intercity) back to Amsterdam. A day in Rotterdam was a great idea! I loved Rotterdam and will be back soon. It is so different from Amsterdam. I was also pleased to get back to views like this. 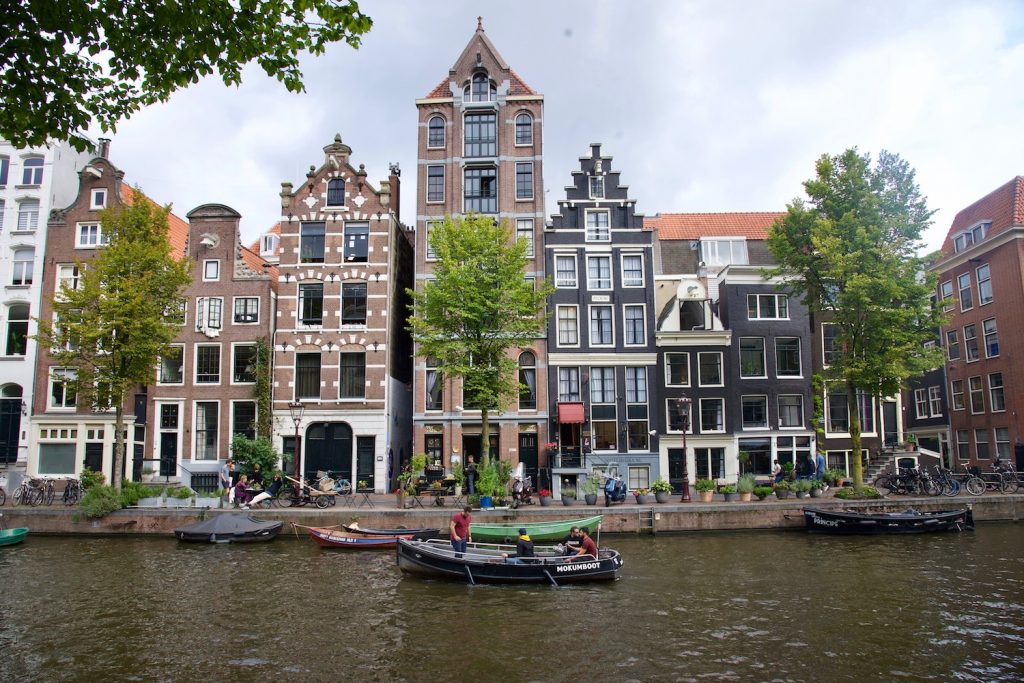 Notes – The Weekend Vrij costs 40 Euros per months (second class is 34 euros), but gives you unlimited free train travel in 1st class from 6.30 PM on Friday to 4 AM on Monday. For more discounts and advantages see the NS page (in English)

To see more blogs like this see a selection here.